Man arrested after 21 dogs rescued from ‘horrendous’ conditions at home 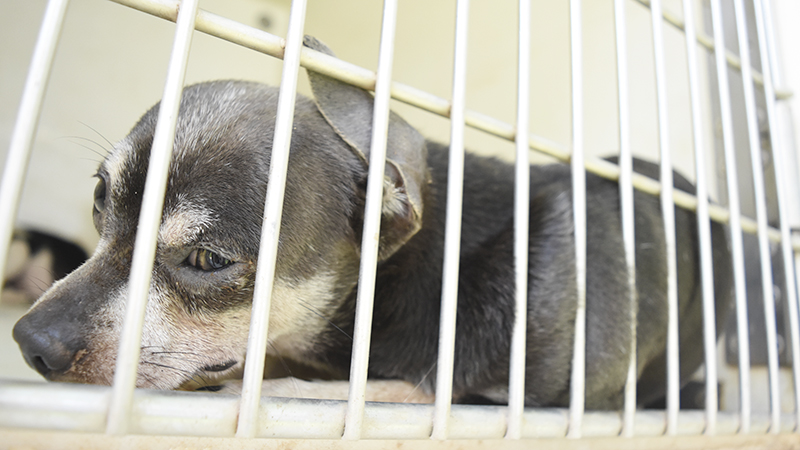 One of the dogs rescued Thursday sits in a cage, awaiting transport. --Daniel Evans

HOGANSVILLE — Twenty-one dogs were rescued from a house in “horrendous” conditions in Hogansville Thursday, and several more animals are likely left inside still needing to be removed.

Rescuers from the Troup County Marshal’s Office and LaGrange Animal Services used large masks and breathing apparatuses so that they could breathe in the house. 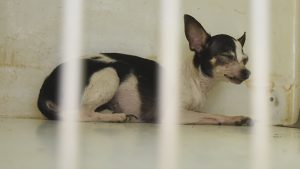 The inside of the house included large amounts of animal feces and showed signs of rodent infestation, according to Hogansville City Manager David Milliron.

“We still have certain parts of the house we cannot access without a breathing apparatus,” said Hogansville Police Chief Brian Harr.

“Officers can’t even go in the front door without being overcome. The officers have gotten very nauseous.”

The Hogansville Police Department responded to a complaint Thursday at 10 a.m. from Adult Protective Services of Georgia about an elderly female resident possibly being abused, as well as poor living conditions at her house on the 200 block of Church Street in Hogansville. 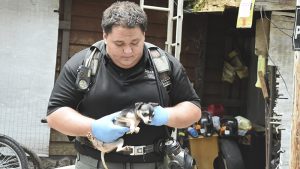 Officers quickly determined that he house was in no condition to be lived in, Harr said.

“An elderly female provided us with an opportunity to look at some of the conditions in the house. Immediately we made a call to animal control officers because we knew we had a very unsanitary environment,” Harr said.

Bobby McCoy, 27, the grandson of the woman, was arrested for neglect by caregiver and cruelty to animals, Harr said. The woman, who Harr estimated was in her 70s or 80s, was taken to WellStar West Georgia Medical Center for treatment.

Some of the dogs, which were almost all chihuahuas, needed immediate care. Two of the animals were euthanized due to deteriorating health, according to Hogansville City Manager David Milliron.

“There have been several animals that have been identified as diseased, injured or in need of veterinary care and those with immediate concerns have already been taken to a veterinarian,” Harr said. “The others we are taking for holding at the animal shelter.” 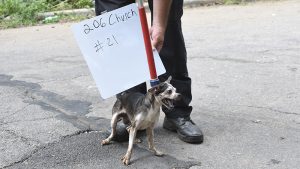 Attempts continued to rescue the rest of the animals left in the home Thursday, Harr said. They set up traps and were planning to check them every few hours to see if any additional had been caught.

Harr said this case may have been worse than a similar incident last year on Jim Drive, where 20 animals — cats, dogs, pigs, ferrets, a parrot and rabbits — were saved from a house in “deplorable” conditions.

“I’ve asked my officers who were involved with both of them how this one prepared to that one, and they said this one is worse,” Harr said.

This is the second animal hoarding case the Hogansville Police Department has worked this month.

The last incident was on Whaley Street July 2, where 20 cats and 28 dogs were removed from a residence. It’s the third large case in Hogansville since November. 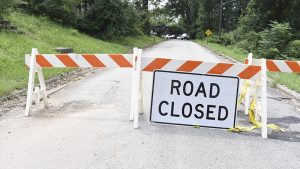 “I think every community has a certain extent of [animal cruelty], but we’ve got a very proactive code enforcement,” Harr said. “Changing some of the ordinances that we’ve done, I think people are more comfortable reporting this. People live beside this and in the past maybe didn’t feel comfortable making the phone call. Now, they are making the phone call knowing that we can get something done.”

“As sad as these things are, one thing it shows is we’ve got a great team. Meriwether, Troup, LaGrange, Hogansville — these animal control and code enforcement people, they all come together,” Harr said.

“When it’s time to get something done, they get it done. My hats off to them because they are working in a very horrendous environment.”