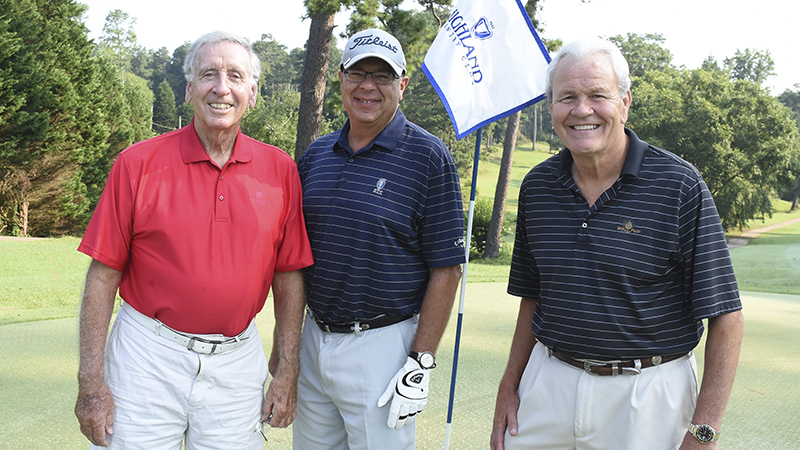 The odds of making a hole-in-one in golf are 12,500 to 1 for amateur players. Given those statistics, the odds of three longtime golfing friends hitting their first hole-in-one on the same golf course in the same month must be astronomical.

Bob Campanale, Louis Lester and Sim Crisler — who combined have played golf for more than 125 years — will let someone else figure out the math. All three of them have more than 30 years of golfing experience, but hit their first career hole-in-one in June at Highland Country Club. The country club sees around 10 holes-in-ones each year, according to PGA Professional Todd Ormsby. But, what are the odds of three golf buddies, none of them having ever hit a hole in one, doing it in the same month?

Campanale, Lester and Crisler all regularly play the golf course as part of a group known as “Elite 16,” and even organize an annual match play event with another group at the club. Crisler joked that some of their friends refer to the Elite 16 as “TOGS,” or “The Old Guys.”

In June, it was the TOGS showing everyone else how it was done — at least on the par-3s.

“For one group of 16 people, no matter how good they are, to have three hole-in-ones in one month’s time, I’d love to know if someone statistically could decipher that somehow,” Crisler said.

Campanale, 65, Crisler, 68, and Lester, 80, have all been playing golf for decades. Crisler, a former tennis player who gave up the sport for golf, hit his hole-in-one on June 1 on the par-3, eighth hole. When he realized the ball went in, he couldn’t believe it.

“There were several words [said] that probably couldn’t go in the newspaper or on radio,” he joked.

“It’s one of the highlights of golf to have a hole-in-one,” Lester said. “All the pros can tell you how many hole-in-ones they’ve had. They might’ve had 14, but they know how many there are. It’s just a very unusual feat.”

“I didn’t want to hoot and holler in case I was wrong, but I thought it went in,” Campanale said.

“There was a group behind me, but what’s the sound of one hand clapping? That’s not very good, so I’m yelling to everyone ‘you’ve got to come here.’”

Campanale sums up his love of golf by saying he plays on every day that ends in “y.”

“This is so important that I will never play with that ball again. I’ve got the ball, I’ve got the scorecard, and I’m getting it framed,” Campanale said. “[On the wall], next to my grandkids is going to be that scorecard and ball. That’s how much I think of that.”

Traditionally, after a hole-in-one, players buy the entire clubhouse a drink to celebrate.

“I had forgotten the date and had to go back to my statement and see where I’d spent $50 on beer,” Crisler said with a laugh.

According to the National Hole-in-One Registry, a hole-in-one is registered once every 3,500 rounds and between 1 and 2 percent of golfers hit an ace each year.

The registry says only 14 percent of golfers who hit one hole-in one are able to accomplish the feat again, but the three locals say that’s just part of the fun — trying to do it one more time.

“It just makes you want to play more golf and do it again,” Lester said.