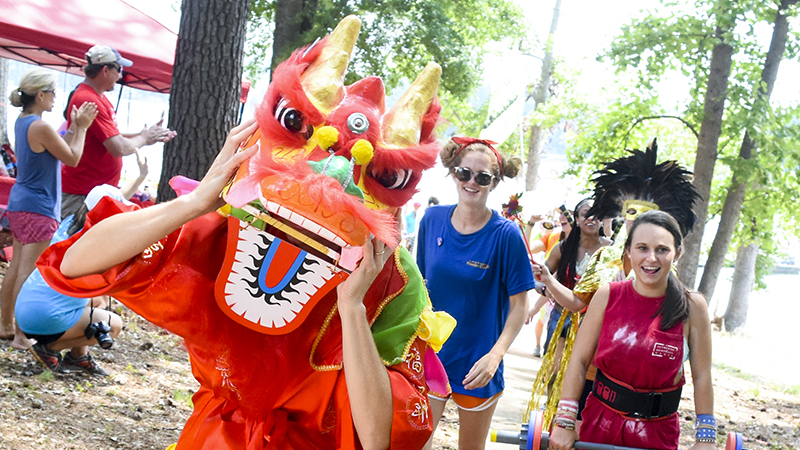 The drummer parade was one of the highlights of Saturday’s West Point Dragon Boat Race at Pyne Road Park. --Daniel Evans

EDITOR’S NOTE: Team names were updated to ensure all are spelled correctly.

Thirty teams battled it out on the water Saturday, competing to win the third annual West Point Lake Dragon Boat race title. Thanks to all of the support, the biggest winner of all didn’t even have to put a paddle in the water.

All proceeds went to Harmony House domestic violence shelter. The nonprofit was aiming to raise $40,000, but final totals weren’t in Saturday afternoon. Based on the crowd, executive director Michele Bedingfield was confident Harmony House was going to reach its goal.

“It’s far exceeded any expectations I’ve had. LaGrange is one of those places that doesn’t just show up, the people show out,” Bedingfield said. “We had two extra teams this year than we’ve had in the past and our sponsors are stronger than ever. We had every sponsor spot filled and every boat spot filled.”

The times were reset for the final round, with 12 of the teams qualifying for the finals. Paula J. Waldron State Farm’s team, which was powered by CrossFit LaGrange, had the top time after the first two rounds and finished fourth overall.

Mike Foster, one of the owners of CrossFit LaGrange, said a lot of people expected CrossFit to do well, since everyone involved is in good physical shape. However, he said rowing the boat is more about teamwork.

“Being in great physical shape plays into it as a factor, but I think a bigger piece to the equation is the teamwork and being together on those paddle strokes,” Foster said.

CrossFit was competing for the first time, but they weren’t the only new team this year.

“This is something you can take back to the job,” said Marcus Thomas, who participated on the Duracell team. “None of us really hang out outside of the plant. We have company picnics but doing this right here, for this being the first time us being together, it’s a great turnout.”

Many of the teams use the race as a fun, out-of-the-box way to build team chemistry.

“Ninety-five percent of the people on our boat had never rowed a boat before,” said Joey Isakson, captain of the American Home Shield Team. “We’ve got seven different departments who are right here coming out with us today. We have authorizations, customer service, so it’s a bunch of different groups coming together to work together.”

The drummers on each team dress up in costume, and there were some creative ones on Saturday.

James Zachry was dressed up as the king off the Bud Light commercials and represented LaGrange Grocery Company’s Dilly Dilly team.

Bedingfield also said the event also helps when the nonprofit starts to apply for grants because it shows the community supports the domestic violence shelter.

“They want to know that our community supports us,” Bedingfield said. “Saying ‘I have a fundraiser where 3,000 people show up and we raise X amount of dollars,’ that lets them know that LaGrange and Troup County support us, and they want to support us because others do.”