If more voters had the mindset of 100-year-old Anne Mudrack, turnout at the polls would never be an issue.

“I think we all should vote,” Mudrack said. “We should have our opinions out there and what we think is right.” 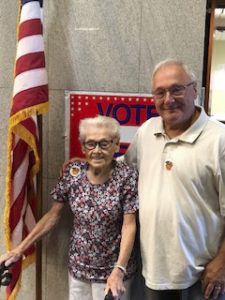 100-year-old Anne Mudrack poses for a photo with her son, Vince, on Wednesday. –Contributed

Mudrack’s son, Vince, took her into the office Wednesday to vote. Only 17 percent of registered voters in Troup County took part in the primary election in May, and even fewer are expected to take part in Tuesday’s run-off. When told of the low voter turnout expected next week, Mudrack said that people should reconsider and get out and vote.

“They should vote,” Mudrack said. “I think you should voice your opinion.”

“I hope they take away that at any age you can vote, from 18 to whatever,” Harper said. “I hope this encourages people to get out and vote as well.”

As of Wednesday evening, there have been 1,046 absentee ballots cast in person or by mail, according to Harper. Early voting runs through Friday, and the run-off election date is July 24.