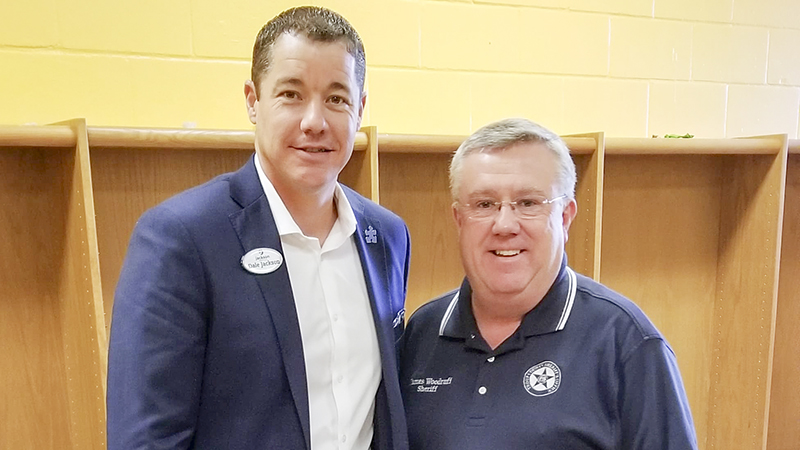 The commission will focus on ways to ensure that qualified patients are able to safely and legally acquire low THC medical oil in Georgia. The law currently allows qualified people to legally possess up to 20 fluid ounces of low THC oil, which is derived from the marijuana plant, but it’s illegal to purchase.

“The bottom line is people can possess it, it’s not illegal to have it. We’re saying you can have it, but there’s nowhere to get it. That doesn’t make sense,” Woodruff said. “If we’ve already established that it’s OK for Dale to give his son this cannabis oil then let’s say how you can get it. Is it going to be a private company or a government [entity]? I don’t know how we are going to come up with an idea, but I think all of us together are going to be able to figure this out.”

Jackson’s son, Colin, suffers from severe autism, one of the 17 conditions that the oil can legally be used to treat in Georgia. In Georgia, physicians send in an application for patients that they believe need a low THC registry card. The card doesn’t address how a patient is supposed to acquire the oil, nor does it make it legal to purchase it. The card’s only benefit is that it protects anyone with low THC cannabis oil in their possession from prosecution.

Woodruff and Jackson agree that the current law makes no sense and needs to be updated.

“It’s very stressful, and we are also hoping to increase safety,” Jackson said. “That’s a huge ordeal for us as parents because we don’t have a legal way, so there is no government regulation. There is no ‘is your lab clean, do you have labs, do you have it tested?’ Without having things set up in the borders of our own state, it’s not only dangerous but extremely frustrating.”

Jackson said many parents have no idea where to acquire the oil and are afraid to try since it is illegal to do so.

“Even though we have worked so hard to get it legal to possess and to become the third state in the country to cover autism, there are still 80 to 90 percent of autistic parents that just will not do it because it is illegal [to purchase], and they’d have to break the law,” Jackson said. “They just cannot handle one more thing to worry about, so for them not to get to see the benefits I’ve seen with my own son, that just breaks my heart.”

Woodruff said critics who believe this is a step toward legal marijuana couldn’t be more wrong. He said that isn’t what the commission is focused on.

“One of the biggest pushbacks through all of this is a lot of people have said that this is just a gateway to legalizing marijuana. This is just the next step. This is not what this is about,” Woodruff said. “I would never agree to say ‘let’s just make marijuana legal.’ A lot of bad things go along with that. It has already been established that these children, these adults with these conditions, benefit from cannabis oil. Now, we say you need it, but you can’t get it.”

Jackson recognized that a lot of progress has been made in recent years, and he feels this commission is the next step.

“In the past, at the Capitol, we have had a very difficult time with open dialogue,” Jackson said. “The main drive behind this commission was to start that dialogue and more importantly do it outside of the 40 days of session where everything is political and everything is based on something else.”

Jackson also said that Cagle, who is running for governor, has said he will take whatever recommendation the commission gives him and make it Senate Bill 1 — if he wins the nomination.

The commission will make several stops around the state, but the dates have not yet been announced.