LSPA’s ‘Dearly Departed’ puts the fun in funeral this weekend 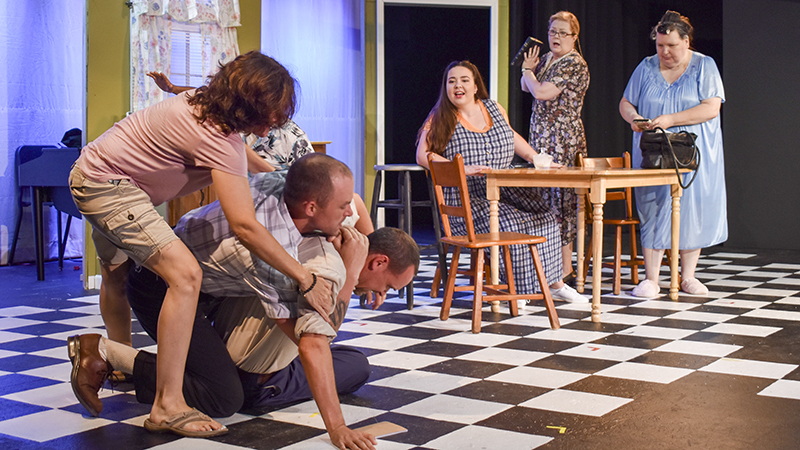 The Lafayette Theatre Company opened a play Thursday that embraces the natural comedy that arises from a dysfunctional family gathered for the funeral of their patriarch.

David Bottrell and Jessie Jones’ “Dearly Departed” will be brought to life in the LTC Black Box Theatre for the next two weekends, and while the plot revolves around a funeral, audiences are more likely to feel tears of laughter instead of tears of sadness while watching the antics of this simultaneously odd and relatable family.

“A dysfunctional family gathers in the heat of summer to lay their patriarch to rest, and dysfunction ensues,” said Cathy Hunt, who plays Marguerite Althorns. “It is very funny. It is broad comedy.”

The play is performed by a cast of both new and familiar faces. The actors said the play will leave audience members comparing characters to their own friends and relatives.

“You recognize your relatives. You know all of these people in one form or another,” said Kelly Finley, who plays Lucille Turpin. “These people are just familiar, and it is a southern setting, but I don’t think in any way we are making fun of southerners.”

Because the characters are so relatable, the humor could almost be described as self-depricating.

“We are making fun of ourselves. Some of it hits a little close to home,” said Keith McDow, who plays Ray-Bud Turpin.

The play follows the days surrounding the funeral of Bud Turpin, including the family’s reactions and dealing with issues like who pays for the funeral. Despite the limited time shown by the play, the audience can expect to see some character growth as the play proceeds.

“Even though the play takes place over just a couple of days, you watch how much they grow with each other and how they are able to resolve some of the things,” said Valerie Longshore-Sargent, the show’s director. “They do it in a personable and funny way, but it is not a farce.”

In fact, Longshore-Sargent hopes the audience will feel a kinship to the characters.

“People are just going to have an instant connection with the characters even if they don’t recognize the title of the show,” Longshore-Sargent said. “They are going to walk away feeling like they are part of the family too.”

This is the second time Longshore-Sargent has directed this particular play, and she said that she has enjoyed the way that LTC’s performers bring the show to life.

“It is great to see this cast bring it to life,” Longshore-Sargent said. “We’ve got a lot of familiar faces, but also some newcomers to the company, which is always nice.”

The audience is invited to get into the spirit of the play as well by dressing in their best funeral attire for the performance. The attendee with the best outfit will win a bottle of chardonnay.