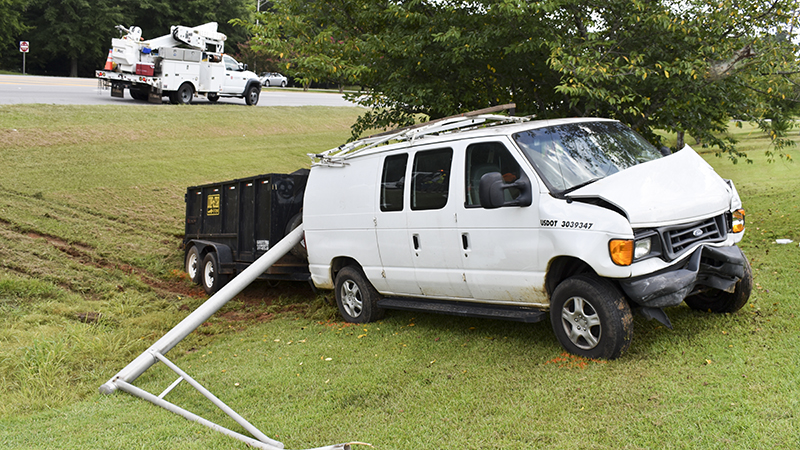 One person was airlifted and another was taken to the hospital for treatment following a multi-vehicle collision on Lafayette Parkway near Chick-fil-A around 1 p.m. on Thursday.

The LaGrange Police Department could not speak to two of the drivers immediately following the accident due to necessary medical treatment, so details were limited on Thursday. Senior Traffic Officer Clint Gibson said it appears the accident began when a silver Ford Expedition driving west on Lafayette Parkway attempted to turn left into the Chick-fil-A parking lot.

According to Gibson, the driver of the Expedition collided with an oncoming U.S. Department of Transportation van pulling a trailer in the east bound lane. The van was pushed into a ditch beside the road.

Cars were waiting to exit the driveway between Burger King and Chick-fil-A, and following the initial collision with the van, the Expedition spun around and hit a Honda Civic, pushing the vehicle back. The car immediately behind the Civic did not appear to have sustained any significant damage. The Civic driver was reportedly injured and was also taken to WellStar West Georgia for treatment.

According to LaGrange Fire Department Lt. Rob Vael, the driver of the van was Life Flighted to a hospital in Columbus. The extent of his injuries was unknown on Thursday afternoon.

The driver of the Expedition did not report any injuries, according to Gibson.

The driver of the Expedition was cited for failure to yield while turning left and was released.