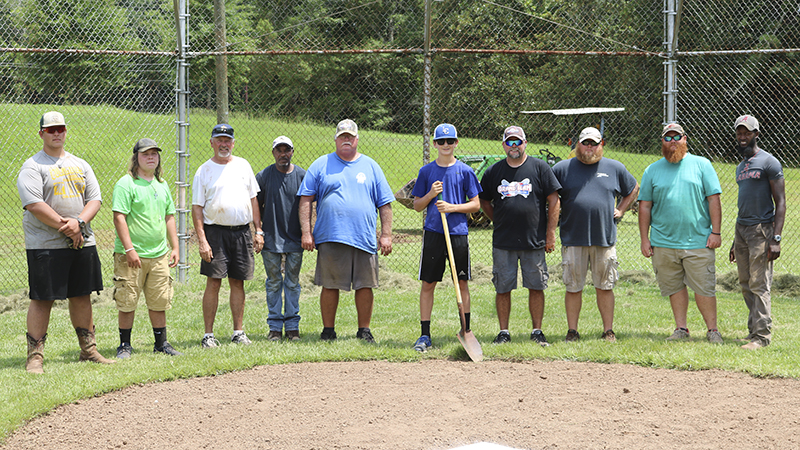 Trevor Booton loves to play baseball, so when it was time for the 13-year-old LaGrange resident to complete his Eagle Scout project, the choice was clear. He wanted others in the community to have the opportunity to play his favorite sport.

Booton has played baseball for about nine years, and he joined Cub Scouts when he was 6-years-old. Over the years, he has been an active participant in both. This week Booten completed his Eagle Scout project by renovating a baseball field behind the William Griggs Recreation Center, and in doing so, made it possible for the community to take full advantage of the space.

“I love baseball a lot, and I wanted to do something to help other people play baseball and other sports,” Booton said.

When Booton started researching what to do for a local baseball field, he took the question to the Troup County’s Parks and Recreation Department.

“I started talking about doing this project in December,” Booton said. “Originally, I was going to plant trees at the complex at George Harris, and they [Troup County Parks and Recreation] said ‘we don’t need any more [trees], but I’ve got another idea. Why don’t you do this field?’ So, I said I would love to do that.”

The field has been used by different local teams in recent years, but it had no longer lived up to its potential.

“It is a field that at one point in time was a pretty nice field, and we had gotten away from keeping it defined as a baseball field and allowed the grass to grow in and fill in,” said Cajen Rhodes, Troup County Parks and Recreation Director. “Trevor Booton approached me about various Eagle Scout projects, so we talked about several of them and that field came up as a point of discussion.”

Finally, on Tuesday, a group of volunteers and county workers gathered to clear the field and remake the baseball diamond.

“We had a combination of scouts and parents and friends and the maintenance crew from [Troup County] Parks and Recreation,” said Terry Booton, Trevor’s father. “We had about 19 people.”

The plan took into account the various purposes that the field is likely to serve, ranging from a backup field for baseball practice to kickball games to football practices.

“We cut it out and defined it,” Rhodes said. “We didn’t do the pitcher’s mound. We didn’t build that back up because there are a lot of people who like to use that field to play kickball and things like that.”

Booton said that he hopes that the field will give the community a place to go to play baseball and have fun, though he worried that it may take a while for anyone to notice the improvements.

“I hope they are over here a lot playing, once they notice it,” Booton said. “From the street, you really still think it is just the old field, but once they come down here, hopefully they’ll be out here playing baseball a lot.”

While Troup County Parks and Recreation did help with the project, Rhodes said that Booton is the one who made it happen this summer, and more upgrades will likely be done at the field as a result of the project.

“It was one of those projects that we had on the backburner, and by Trevor taking the lead and wanting to do this Eagle Scout project, we were able to push it to the forefront, start to attack it and get that part knocked out,” Rhodes said.

“We are actually going to follow up and look at rehabbing the fencing going around the field. It needs some serious attention.”

The crew completed work on the field on Tuesday night, following an estimated 95 man hours of work.

“It is pretty impressive, and I’m very proud of him,” Terry Booton said. “I’m really proud of him getting his Eagle.”

Booten plans to represent the Atlantic Coast Region in the USSSA All American Games in Viera, Florida, starting July 30. He will be one of only three players from Georgia in the tournament.