Children save 2-year-old from drowning 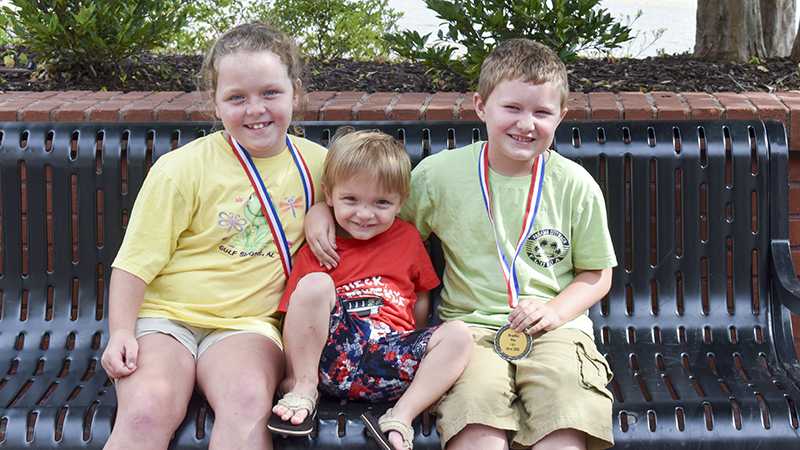 Earlier this summer, a local family narrowly avoided tragedy thanks to the quick thinking of two children who saved a drowning 2-year-old.

According to Courtney Pike, the mother of the 2-year-old and one of the young heroes, her children and their cousin were playing in the pool during a family cookout when the incident occurred. She said that she only turned away for a moment, but her daughter, Caleigh Thomas, and cousin, Brantley Pike, were quick to act when her youngest slipped into the water.

“They are true heroes,” Pike said. “If it weren’t for them, I don’t think he’d be standing here. It happened within seconds. He decided he was going to take his arm floats off, and he was going to go swimming. The steps were slippery, and he lost balance and down he went.”

Caleigh and Brantley quickly worked together to pull the child to the surface.

“He slipped off the pool steps and fell,” Caleigh said. “I picked him up and got him out of the water.”

Pike said that action may have saved her son’s life.

“Because of what they did, I had time to get over there to him to get him out of the pool,” Pike said. “That is when I called 911, then they took him to Columbus [Piedmont Healthcare to check him out].”

The children’s grandparents awarded them with medals on Wednesday to remind them of the impact of their actions for years to come. The children encouraged others to be careful around the water and to use floatation devices.

“Don’t get close to the water and make sure you have floats,” Brantley said.

Pike recommended that all parents invest in swim lessons, especially after her experience with how quickly her son was able to remove his snap-on swim vest.

“He was able to take his arms out, turn it around, un-snap it,” Pike said.

According to Pike, the child who fell in the pool suffered no serious injuries from the accident, and he smiled wide as he greeted his cousin on Wednesday.