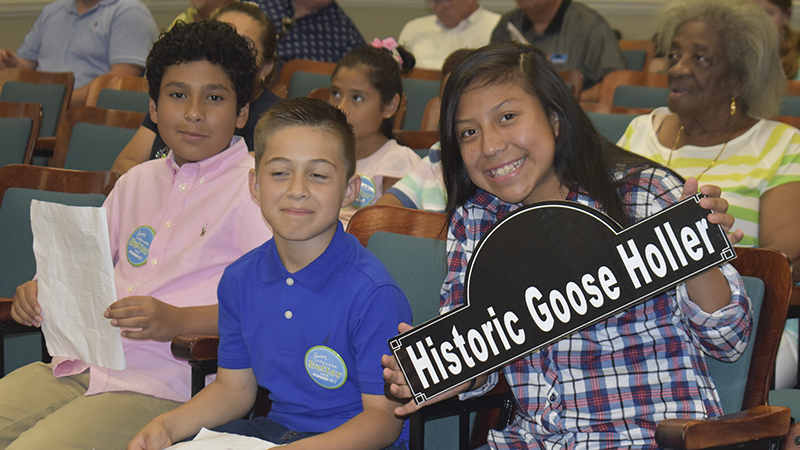 The City of LaGrange is adding a new historic marker to an old neighborhood this week, thanks to the efforts of local children to bring to light the historic significance of the street where they live.

The children learned about the history of their street from a long-time resident, Mattie Boddie, who was volunteering at Camp Libertad.

They asked the LaGrange City Council Tuesday to allow a “Historic Goose Holler” sign be place above the Mona Lane road sign to honor the residents who lived there in the past.

“Today I ask you to honor Ms. Mattie and all who called Goose Holler their home,” said Delfina Martinez, a resident of Mona Lane and ninth grader at LaGrange High School. “Today I invite you to both make and preserve history by approving the historic marker.”

The children learned about the area’s significance this summer through first-hand accounts and a trip to the Troup County Archives.

“[Anton Flores] brought the campers to the museum, and they worked more with Native Americans,” said Shannon Johnson, the executive director of the Troup County Archives. “We talked about some of the first residents of LaGrange, the Native Americans, so I knew they were pursuing this.”

Hearing the history of their community told by someone who lived through it made it meaningful to the campers and brought to light information that could only be learned through those first-hand accounts.

“We didn’t know our street was once a historic black community called Goose Holler until we met Mattie Boddie who is here with us today,” said Jefferson Villatoro, a resident of Mona Lane. “Neighbors and volunteers are holding a day camp for my friends and me on Mona Lane. We’ve learned lots, but one of our best teachers was Ms. Mattie.”

The children described Boddie as an active community member who despite an age difference of several decades, was able to relate to local children.

“When I heard Ms. Mattie speak, her childhood sounded a lot like mine,” said Bryant Jimenez, a resident of Mona Lane and sixth grader at Gardner Newman Middle School. “Chickens running from yard to yard. Children playing outside. Parents working hard. This is how I will remember growing up on Mona Lane.”

There were several significant differences though.

“Ms. Mattie grew up on our street a long time ago,” Villatoro said. “In fact, there wasn’t a street, just a dirt road. There wasn’t running water or lights. It was one of the few places where African Americans were allowed to live. It also wasn’t called Mona Lane back then. It was Goose Holler.”

According to Villatoro, Boddie’s daughter was one of the first African American students to attend LaGrange High School, the school he plans to graduate from in the future.

The children said Boddie challenged them to make their community a better place and led by example.

“I took Ms. Mattie’s challenge to us very seriously,” Jimenez said. “I am leaving Mona Lane better than I found it. Already, I have helped build playground equipment and picnic tables. These items are going in the empty lot where the burned down church once was. That church was called Welcome Church.”

With the help of volunteers from Rosemont Baptist Church, the lot is being transformed into what Jimenez called Welcome Park.

The mayor commended the campers for their research into the history of the neighborhood, and the council voted unanimously to allow the sign. The sign will not replace the Mona Lane sign, only denote the neighborhood’s historic name.

“Anytime a neighborhood like that can take the historical significance upon themselves and pursue something like this, I think that is outstanding,” Johnson said.