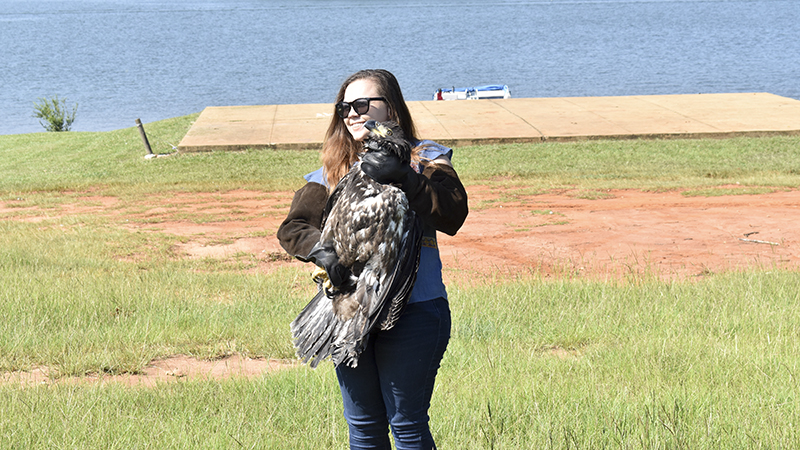 Chanel Reali holds the 18-week old bald eagle on Saturday. Because of the eagle’s age, it has not yet grown in the white and brown plumage that bald eagles are known for. (Alicia B. Hill | Daily News)

A young bald eagle took flight on Saturday at Pyne Road Park in front of a transfixed crowd.

The 18-week old bald eagle was rehabilitated by the Auburn University’s Southeastern Raptor Center in conjunction with the Georgia Department of Natural Resources. The fledgling eagle was admitted to the Raptor Center in April after the bird reportedly fell out of a nest in Thomas County. Approximately three to four eagles are released at Pyne Road Park a year, a number made more impressive by the fact that a few decades ago, there were no active eagle nests in the state.

“This is an example of the remarkable success of the endangered species act,” said Bob Sargent, a wildlife biologist with DNR. “The bald eagle was listed as an endangered species in 1973. Back then, our national symbol in the lower 48 states it was at risk of becoming extinct.”

The State of Georgia likewise ruled the bird endangered in 1974.

“At that point in the lower 48 states, there were fewer than 500 active nests,” Sargent said. “For a decade in the 1970s, we found no successful bald eagle nests statewide.”

Sargent said that the low populations at that time could be attributed to deforestation and certain chemicals in the water that could be harmful to the eggs of birds near the top of the food chain. Bald eagles were also actively hunted in some parts of the U.S.

The bald eagle’s protection under the Endangered Species Act has turned that around though, according to Sargent.

“We went from the 1970s with no successful nests state record last year statewide we found 218 occupied nests, which is very encouraging,” Sargent said. “Regarding the turnaround, it is much better in Georgia, so much so that we have actually scaled back on monitoring them.”

Sargent previously visited every active bald eagle nest every year, but this year he said that he only made in person visits to about half of the nests because of growing confidence in the bald eagle population.

“It feels great,” said Chanel Reali, the Auburn University student who helped release the eagle. “It is so special to me, and I am really glad that we had such a big crowd today and that so many people care about it too.”

Saturday was the first time that Reali was able to release a bald eagle, but she said that she has released other raptors before. She also said that public awareness of large birds is important.

To learn more about the Southeastern Raptor Center, visit Vetmed.auburn.edu/raptor/.