Crashing down: Wind storm brings a family’s world falling in around them 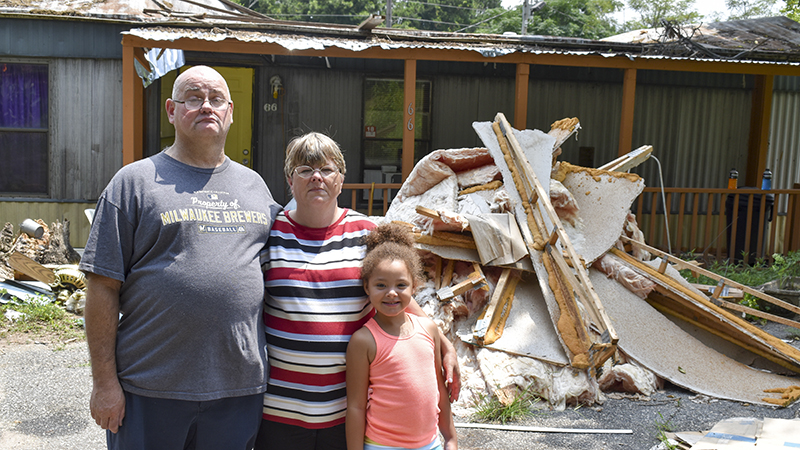 Mangrom and Tammy Brown and Aaley East stand in front of their severely damaged home on Monday. (Alicia B. Hill | Daily News)

A local family is still feeling the impact of a wind storm from earlier this year after a tree crashed through their living room and left their home damaged beyond repair.

Mangrom and Tammy Brown were preparing their home for bad weather that was expected in the area  in late June, with the help of their granddaughter, Aaleyah East, when a nearby tree crashed into their home — right where Tammy Brown had been sitting only moments before.

“On June 27, we had a windstorm, and my granddaughter and my husband were outside working on the trailer,” said Tammy. “I went inside and sat down, and all of a sudden, I started screaming, ‘It’s caving in! It’s caving in!’ Because I didn’t know what was happening.”

She said that she had been sitting on the couch and had just gotten up to go to the kitchen when the roof began to cave in around her. Her family was likewise concerned.

“I was scared that she might have gotten hurt,” Mangrom said.

Mangrom then went to the door to see if Tammy was injured, but feared the worst.

“My husband came to the door and asked if I was alright,” Tammy Brown said. “I said, ‘Yeah, I’m in the kitchen, but I can’t get out.’ So, he helped me get out.”

The couple was thankful that everyone was safe. However, the tree had significantly damaged their home, and they said that their insurance did not provide enough coverage to purchase another two-bedroom trailer where the Browns and their granddaughter could live.

“We got [an] insurance [payout] on the trailer, but we don’t have enough to get another trailer this size,” Tammy said. “We’ve been living from motel to motel.”

The family has been able to find a motel to stay in for a longer period of time in order to satisfy a temporary address requirement for Aaleyah to be able to go to school, but every day that they are forced to stay in the motel, they lose some of the money that they would rather go to a permanent home for their family.

“It is costing like $900 a week [for total bills], to stay over there plus bills here [at home],” Tammy said. “We don’t know what we are going to do. We’ve been looking at trailers, but with the money that we’ve got from the insurance company, it’s not enough to put another trailer here.”

The Browns said that they have received some assistance from the American Red Cross and local churches, but even those funds in addition to the paychecks from two jobs worked by Mangrom still leave finances tight. What they said they really need is a trailer that will fit their family and their limited budget, and due to the roof damage, they will also have to replace most of their furniturebecause of corresponding water damage.

Unfortunately, their time is also limited, since Aaleyah will need a permanent home early in the school year.

Anyone who would like to make a donation, may do so through Baptist Tabernacle in LaGrange.

*** Edit: The spelling of Aaleyah’s name has been corrected, and the donation location has been changed at the request of a family member.

Farewell to some friends: Four original board members step…