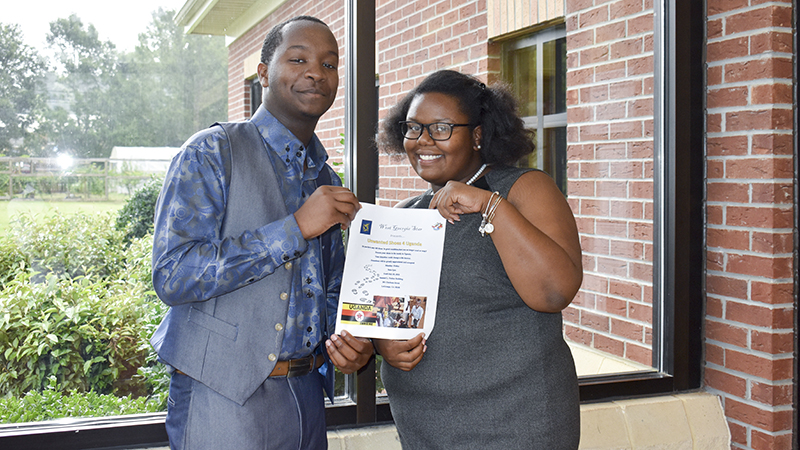 raelyn Dozier and Alexis Fuller organized a shoe drive for children in Uganda. The teens gathered around 1,200 shoes to send to Uganda. (Alicia B. Hill | Daily News)

This summer, local teens went out into the community and gathered approximately 1,200 pairs of shoes to send to people in need in Uganda.

The shoe drive ended on Saturday, and the shoes are now being packed up to send to children facing podoconiosis, or elephantiasis. The teens who organized the shoe drive said that there has been a great community response to the event.

“When we told people why we were doing it they wanted to give because they see that we are fortunate, but there are other people who are less fortunate,” said Braelyn Dozier, one of the teens who organized the event. “They wanted to help us help other people.”

That support boosted them far beyond their original goal of 500 shoes.

“A lot of people supported us,” said Alexis Fuller, one of the teens who organized the event. “We never got any negative feedback. If anything, everybody was always ready to donate what they had.”

The teens were challenged by Zsa Zsa Heard, the Chief Executive Officer of the LaGrange Housing Authority, to try to give back to less fortunate people through the drive during a staff meeting that included summer workers, like Dozier and Fuller.

“I want the kids here at the housing authority to learn how to do public service and understand why we should give back to other people,” Heard said. “Giving back makes us better people, so I asked them to start a campaign and collect shoes. I gave them the goal of collecting 500 shoes. They actually collected over 1,200 shoes.”

In order to gather so many shoes, the teens talked to family, neighbors and businesses about donating shoes for Ugandan children.

“Since the beginning of June, we’ve been collecting shoes on the sides of roads, asking people, yard sales, going to different businesses, going out of the city to collect shoes,” Dozier said.

They were impressed by the difference that it was possible to make with their efforts.

“To me, it is a bittersweet experience because it is amazing how we can just sit here in our hometown and do something internationally for someone millions of miles away,” Fuller said.

They said it also made them appreciate simple things, like having a pair of shoes to protect their feet.

“I felt like, I am a fortunate person, and if there is someone less fortunate, and their health is a problem because of this, I can make a difference with just finding shoes to take over there, so that they can be shipped off to be helped,” Dozier said.

Heard said that she hopes that the teens who participated in the Shoes for Uganda shoe drive will gain valuable insight and experience from the event.

“My main goal here at the housing authority is to understand what it is to be a public servant, what it is to give back, doing for others,” Heard said. “We are fortunate, so I am a believer that you should always assist the less fortunate in any way that you can.”

The shoes will be sent to Uganda, where Tina Ogletree of LaGrange Alumnae Chapter of Delta Sigma Theta Sorority Inc. will personally submit the shoes to be given to the people living there in order to combat cases of elephantiasis that, according to a National Public Radio report, is caused by working in fields while barefoot.

The sorority has been gathering shoes for the cause for several years through its annual “Bow Ties and Pearls: An Evening of Jazz and R&B” at Sweetland Amphitheatre. The most recent event was in May.