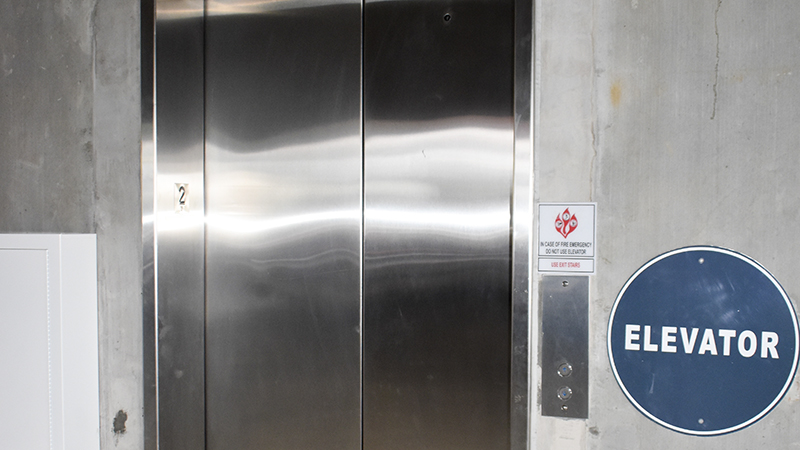 The elevator in the parking deck behind the Courtyard by Marriott became stuck three times in July, according to the LaGrange Fire Department. (Alicia B. Hill | Daily News)

The new parking deck behind the Courtyard by Marriott in LaGrange has dramatically improved the parking situation in downtown, but with the improvement has come a new problem, in the form an elevator that got stuck three times in July alone.

The new, city-owned parking deck opened its bottom floor on Sept. 21, 2017, and the rest of the deck in October. In the less than a year that the new structure has been open, the City of LaGrange has faced several concerns regarding the elevator getting stuck between floors or the doors not opening.

“(Since) we first opened up in October of last year, there have been a few issues because it was a new elevator,” said Alton West, the City of LaGrange’s community development director. “There was some moisture that got into some of the control areas, and the elevator did stick a few times.”

West said that the issues were minor and were quickly resolved.

“It has been between floors, or the doors just wouldn’t open,” West said. “I know that when we had a heavy rain here last year, there was a lot of condensation on the elevator itself. We had to close it off (then) because the doors were not opening. Then at one point you could pull them partially apart, and the elevator was between floors. I think a lot of that has been resolved.”

However, not all concerns regarding the elevator have been resolved.

According to LaGrange Fire Department Lt. Rob Vael, the LFD responded to five calls for service at the parking deck behind the hotel in July. Two calls were for a defective elevator with no occupants, and one call was for the removal of a victim from a stalled elevator. The remaining two calls were unrelated to the elevator.

West said that he was not aware of the recent incidents as of Tuesday. According to the elevator inspection permit, it was last inspected on June 14, 2018, and it expires in July 2019. The operating permit from the Office of Insurance and Safety Fire shows and inspection date of Aug. 21, 2017.

“The time that I went out with the state inspector, he said it was operating properly, so I don’t know whether some of the kinks as far as the newness need to be worked out, but no one wants to be stuck in an elevator,” West said.

West said that he felt the elevator was safe, and attributed any malfunctions to the newness of the elevator.