‘What I saw, in my opinion, were unlivable conditions’ 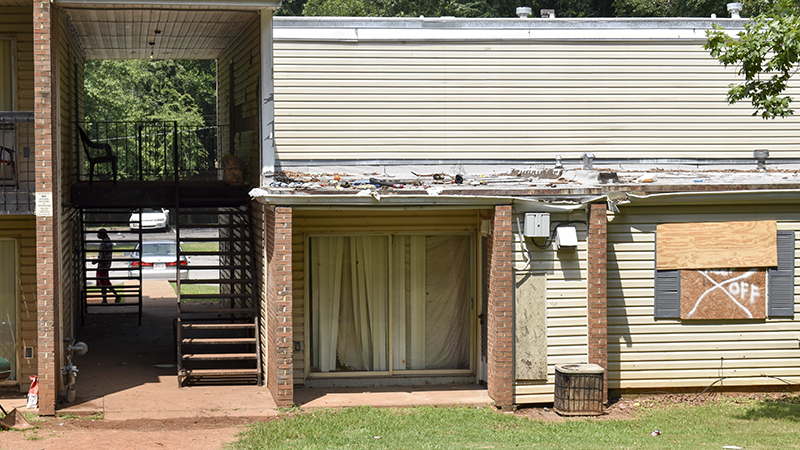 Residents of Tall Pines Apartments have filed numerous reports outlining concerns with the complex beginning around 2014. The complex is now under new local management, but some items on the to do list is clearly visible. (Alicia B. HIll | Daily News)

The complex changed local management less than three weeks ago, but with a list of complaints that have been building for at least four years, some officials have been forced to question if it is too late to remedy the problems facing the complex. What is being done about the apartments was discussed at length during last week’s city council meeting, where some council members learned for the first time the extent of the repairs needed.

“These units are 43 years of age, and there has been very little to almost no maintenance that was done on these units in that period of time that we can tell from just from walking in,” said Alton West, the City of LaGrange’s community development director. “Just minimum code compliance things.”

Multiple residents of Tall Pines spoke to the LaGrange Daily News on Tuesday, but did not wish to be quoted due to fear of retribution. Several residents said, however, that there have been continuous problems with bugs and drainage in the apartments. Those statements reflected West’s presentation to the city council last week.

“We recently have been going out to the properties to look at other things, because we have been getting numerous complaints from the residents,” West said. “It is anything from HVAC units being out for over a year and heating a home with a stove, (to) the air conditioning units not being repaired, doors not properly locking, suspected mold, the carpet being filthy, etc.”

The LaGrange Police Department also noted in an incident report from July 24 that a resident expressed concern for unsanitary living conditions, due to a large number of flies coming through an air conditioning unit.

Despite this, the new manager, Dionne Davis, said that conditions are improving as quick as she and the new maintenance employee can make repairs.

However, Davis has her work cut out for her if she wants to restore the apartments that, during an inspection three months ago, were deemed “unlivable.”

“What I saw, in my opinion, were unlivable conditions,” West said. “Now, I also want to say that there were some general housekeeping things that some people need to do in order to make their apartments livable as well.”

However, some of the problems seemed to fall on the management of the complex.

“There was actually one young lady that had her bathtub filled with water, and she stated to us that it had been in that condition for over a year,” West said. “She had three totes in the bathroom that she was bathing her children in.”

The problems initially came to the city’s attention after a local doctor reported that living conditions in one of the apartments could be contributing to a child’s breathing problems.

“The way that this came to our attention was actually through a physician in our community,” West said. “There was a child that was living in the apartment complex there, and she was having a number of respiratory issues. She was going to the doctor quite frequently, and the physician actually contacted Marguire Potts, and said, ‘Have you all been over to this location?’”

“Complaints have come to the mayor and council, and so I appreciate this update on [the city staff’s] efforts,” LaGrange Mayor Jim Thornton said.

The city council also discussed how groups like DASH and the LaGrange Housing Authority could play a role in ensuring that residents of Tall Pines are able to live in proper housing conditions if the new management is not able to do so on its own, and the possibility of the LHA taking over the property is possible.

“I actually got to go in and see the apartments and take pictures,” said Zsa Zsa Heard, the Chief Executive Officer of the LaGrange Housing Authority. “It is not livable, to be completely honest, and I know in my professional opinion, there is no way that complex can sustain more Band-Aid fixes. It just can’t.”

Heard said the temporary fixes that have been used on the property in the past will not be enough, and noted that the property receives U.S. Department of Housing and Urban Development funding, just like the housing authority, to maintain the apartments. Heard also said that the LaGrange Housing Authority has been contacted about purchasing the Tall Pines Apartments.