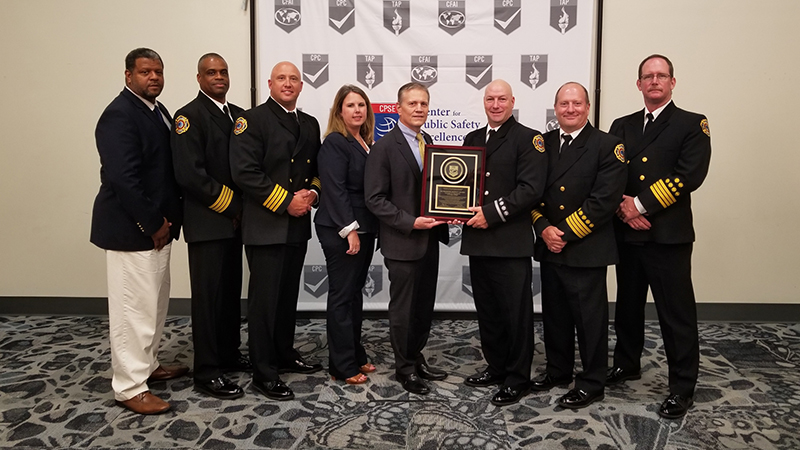 The LaGrange Fire Department poses for a photo after earning accreditation from the Commission of Fire Accreditation International Wednesday. The accreditation was announced in Dallas, Texas. --Contributed

The LaGrange Fire Department became the tenth fire department in Georgia to receive accreditation from the Commission of Fire Accreditation International on Wednesday.

The commission unanimously voted to approve the accreditation during a hearing in Dallas, Texas, where LFD and 40 other agencies were scheduled to address the commission. According to a Facebook post by the City of LaGrange, less than 250 fire departments out of the approximately 30,000 in the nation have this accreditation. The LFD accreditation has been years in the making, and Public Safety Chief Lou Dekmar thanked all the men and women who made it possible.

“I would like to recognize the women and men who aren’t here because although the deputy chiefs were each charged with their responsibility, I don’t believe there was a member of the agency that didn’t put their hands on some aspect of the standard or a policy or a best practice that made this recognition and accreditation possible,” Dekmar said. “I want to thank them.”

The accreditation hearings were broadcast live on the Commission of Fire Accreditation International’s website and was attended by Dekmar, LFD Deputy Chief John Brant, LFD Accreditation Manager Mike Webb, LaGrange City Manager Meg Kelsey, LaGrange City Council Member Nathan Gaskin and other deputy chiefs from LFD. The department was complimented on the fact that city representatives were taking part in the process, and city officials were proud of LFD’s accomplishment.

Commission representatives commended the LFD for its persistence in “making sure they get it right” and pursuing accreditation and asked for Dekmar’s advice to other departments hoping to gain accreditation.

“On the police side, we have been accredited for almost 20 years, and accreditation isn’t a program or a process,” Dekmar said. “It becomes literally the culture of the organization because as technology changes, as personnel change, as competing priorities and funding change, if the agency doesn’t position itself to look at those changes in a way that creates those opportunities — opportunities for engagement in not only the folks that work at the fire department but the community and the elected officials — then you are going to miss opportunities to provide that level of service.”

The LFD started documentation to receive accreditation in August 2016, and those who spoke on the process talked about some of the hurdles the department faced. Those challenges included the change in standards and 51 recommendations that needed to be taken into account in order to receive accreditation. However, Dekmar said the process was good for the fire department and the people it serves.

“Most importantly, the need to be prepared for those things you do not commonly deal with are what accreditation forces you to look at,” Dekmar said. “It forces you to look at things you would not normally look at in a bifocal-ed way, where you are looking at the brush fires in front of you, but also looking to the future to deal with those issues that if you don’t deal with them effectively, are going to be a brush fire for you tomorrow or the next day.”

However, the Commission of Fire Accreditation International did note a few areas where the department still needed work. The commission recommended that the LaGrange Fire Department continue to work on how it handles alarms through Troup E911 and improving response times. It also recommended that the LFD hire a fire chief instead of having a public safety chief over both police and fire. The LaGrange City Council discussed the possibility of hiring a fire chief during its retreat in March, and on Wednesday, Dekmar confirmed to the commission that the city will likely hire a fire chief by the end of the year.