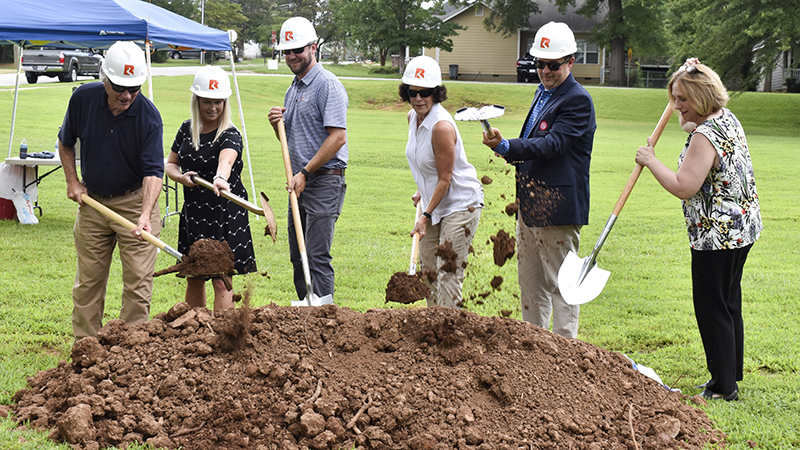 DASH, community partners and city leaders break ground on townhomes in the Hillside community on Friday. --Alicia B. Hill

Representatives from DASH for LaGrange and other community groups gathered in a grassy lot near The Cart Barn Grill and Beacon Brewing Co. on Friday for the groundbreaking of Hillside Townhome Flats on Jefferson Street.

The townhome development has been under discussion for years, and the LaGrange City Council granted a zoning request for the development in July 2017. The townhomes are expected to be complete in as little as eight months.

“We’ve got an 18-unit townhome, flat development that is going to fill up this entire site,” said Marie McNally, the executive director of DASH LaGrange. “It will go all the way to Jackson Street. Our first phase is the first building, which will have eight of those units, and those units will have three bedrooms and two baths. It will have a market rental rate, and we are hoping that maybe in about eight months, we’ll be ready to cut the ribbon.”

The property is one of several owned by DASH in the area, and the use of the space was considered especially important because of its location near local storefronts and LaGrange College.

“We struggled mightily with commercial investment here, and we never had an intention of competing with downtown LaGrange,” said Ricky Wolfe, a member of DASH for LaGrange’s board of directors. “But if you go back and look at the history of LaGrange, there were always satellites of commercial activity of which this was one of the most prominent. So, 18 years later, we finally have a restaurant here. We’ve got a great brewery here. We’ve got this piece of property which we’ve held onto for a long time.”

Hillside has been one of DASH’s focuses, but it has also invested in projects in other parts of the community and other areas.

“We have been talking about this project now for a couple of years, but DASH got our start back in 2003 working on dependable, affordable, sustainable housing right here in this community,” McNally said. “While some of you may know that, you may be interested to know that from 2003 until today, we have been working really hard to bring affordable housing all over the county. We’ve done about $50 million worth of work here in LaGrange and about $14 million in West Point and Hogansville, and we want to continue to do that kind of thing.”

City officials attended the groundbreaking and were optimistic about what the development will mean for the community.

“It is great for Hillside, and it is great for the entire city,” LaGrange Mayor Jim Thornton said. “I am very excited to see DASH taking some of the resources that they’ve developed over time through tax credit projects and returning those resources back into the City of LaGrange, which has always been their plan.”

The project follows part of a plan that a DASH sponsored group developed to show what the neighborhood needed. The recommendation identified a need for high density housing that could provide a population to support restaurants and retailers.

“If you study the models around the country, you’ll find that the successful ones were a mix of the people that live there and people who move in who share the commonality of, ‘This is our neighborhood,’” Wolfe said. “Those are the ones who do after school reading, guitar lessons and help with litter patrol. The dream for this place would be for 18-families to live here that will join the families that are already here to make this whole area a better place.”

The townhomes will be a private DASH development according to McNally. She thanked all the community and industry partners who made the project possible.