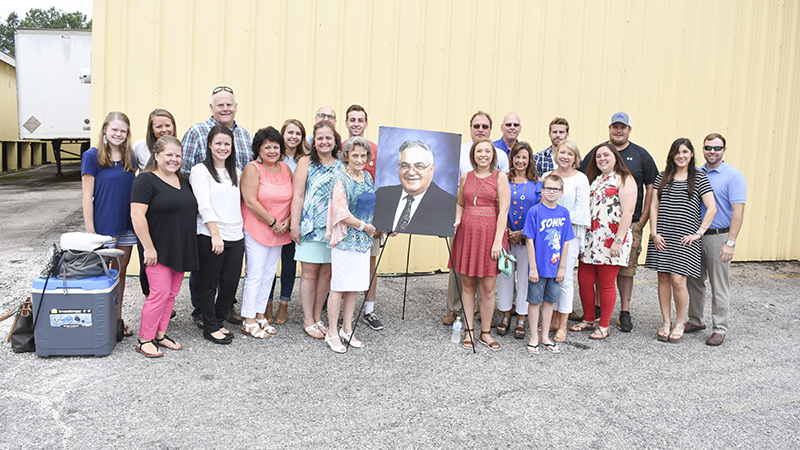 The Alise family poses for a photo at the dedication ceremony Sunday at the Habitat for Humanity Restore building in LaGrange. --Daniel Evans

The Habitat for Humanity Restore dedicated its building to longtime volunteer John Alise Sr. on Saturday.

A new sign was placed on the store, naming it the John J. Alise, Sr. building, and his family and other Habitat volunteers gathered for a ceremony in his honor. Alise passed away in April, and Saturday would’ve been his 80th birthday.

“I think it shows the community what a difference one person can make,” said Steven Brown, executive director of Habitat for Humanity in LaGrange. “I remember talking to him about when he learned to fix appliances. He said it was when he started coming over for Habitat. He was a math teacher and a coach, and he got out of his comfort zone and started helping us here. He found his niche was working on appliances, and what a difference he’s made.”

Brown said a significant amount of the proceeds the store gets is from selling appliances, and Alise was a huge part of that.

“He tackled them all,” Brown said. “Washers, dryers, dishwashers, refrigerators, stoves, anything we threw at him, he would try to work on.”

Dozens of members of Alise’s family were on hand for the ceremony, including Carolyn, his wife of 59 years.

“He would be pleased, but embarrassed,” Carolyn said. “He didn’t want fanfare about things. He just enjoyed doing work for others. He loved working on machines, like washing machines and stuff. He would go pick up things for habitat and bring them back. He just enjoyed the work.”

LaGrange Mayor Jim Thornton also spoke at the ceremony in honor of Alise and the work he did in the community.

“The things he’s done here have benefitted the community of LaGrange, the city of LaGrange and have helped hundreds of local families improve their situation,” Thornton said.

New hairdo for school: Hundreds of children get hair…