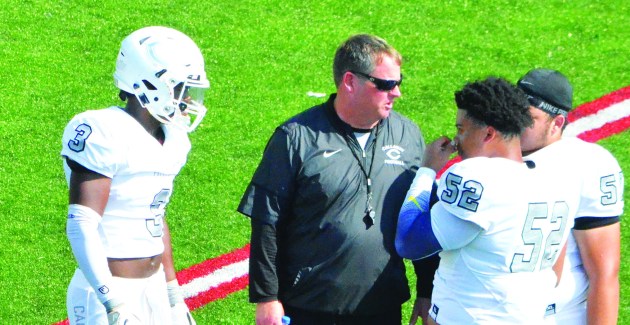 Pete Wiggins felt a need, a calling, to recognize a group of people who he feels are under-appreciated.

They are the first responders of Troup County, the police officers, the emergency medical service (EMS) personnel, the fire-fighters, and each day the work they do can be the difference between someone living and dying.

“They see something tragic every day,” said Wiggins, who has been Callaway’s head football coach since 2005. “Yet tomorrow, they get up and they do it again. That says a whole lot about their character.”

Callaway will open its season on Aug. 24 against Opelika at Callaway Stadium, and Wiggins is setting aside some time that night to say thank you to the local first responders.

All first responders, along with one guest, will receive free admission to that night’s game.

They will also be treated to a pre-game meal, and they will be recognized on the field before the game.

Also, a video created by Callaway students honoring the first responders will be shown on the new scoreboard at Callaway Stadium.

“It’s really turning into something,” Wiggins said. “I think it’s something great for the community.”

For Wiggins, the cause is a personal one.

“I wouldn’t be here if it wasn’t for the Grace of God, and a group of people with the skills to take care of what I had going on,” Wiggins said.

When Wiggins was 12-years-old, he fell off a horse and had to be Life Flighted to a local hospital.

Wiggins faced another medical emergency a few years ago, this one heart-related, and once again he found himself relying on first responders to possibly save his life.

“A bunch of years later I was at Callaway High School rocking along, and I started having some problems,” Wiggins said. “Three days later I was on a helicopter to St. Joseph’s (in Atlanta). I wouldn’t be here if it wasn’t for that group of people. So, it means a lot to me. It’s a very special group of people, that every day get up to save somebody’s life, to do something good for the community. I just want to recognize them.”

To help with the cost of everything associated with first-responder day, Wiggins has reached out to local business-people, and he said everyone he has contacted has enthusiastically agreed to help.

“It’s great to see the community behind this event,” Wiggins said.

The first responders will get to see what is shaping up to be a memorable night of football.

It’s the first time the two powerhouse programs have ever met on the football field.

Opelika, a consistent championship contender in Alabama, returns 34 seniors from a team that went 9-4 last season and reached the quarterfinals of the Class AAAAAA

The Cavaliers are loaded as well coming off a season where they went 11-2 and made it to the Class AA quarterfinals.

Under Wiggins, putting together a season like that is the norm.

Wiggins has an overall record of 115-42, and since 2008, Callaway has won six region titles and has made it to the state semifinals twice, and the state quarterfinals twice.

Since 2012, Callaway has been in double figures in wins every year but once, and the team is 24-3 the past two seasons.

While the success means a lot to Wiggins, he also takes immense satisfaction in helping positively shape the lives of young men.

“You build relationships with a group of kids that changes every year,” Wiggins said. “You get to know kids, and you care about them. And when you see kids that have tough situations, it’s part of what you do. It’s part of you. I think being a football coach, it’s very special in a lot of ways. Not only on Friday nights, but it’s about being able to make kids better, and handle situations that are tough on them.”

While finding ways to win games is obviously a big part of the job, Wiggins added that “it’s also about building character, and teaching these young men for down the road. Because football is temporary. You have to build the character to prepare them for the hardships, and the good times, they’ll face down the road. There are so many lessons that come from football at practice, in the weight room, the adversities that they face. Also, that comes from coaches, because a good coach is going to push their kids.”

Wiggins views the first-responder night as part of the education process for the players.

“There’s great appreciation for them, great respect,” Wiggins said. “But I don’t think it’s enough. I want it to be a special week for those people. And I want our kids to see that.”