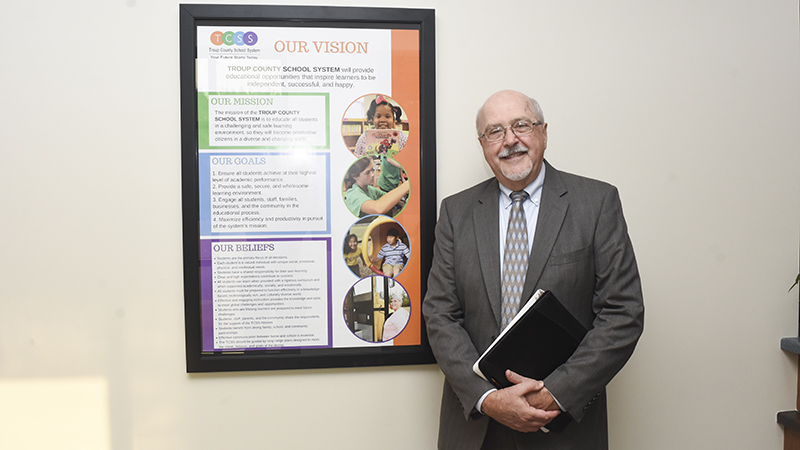 Roy Nichols is taking over as interim superintendent of the Troup County School System. --Daniel Evans

The new interim superintendent for the Troup County School System will be a familiar face to many.

Roy Nichols served as Troup County Schools Superintendent from 1999-2004 before leaving to take a position at the University of West Georgia, where he became an educational leadership professor and the department chair in that field of study. He left UWG in 2007 to become the superintendent of the Mobile County School district in Mobile, Alabama, and served there until his retirement in 2011.

During his tenure in Mobile, Nichols was seen as a steady hand, guiding a troubled school district through challenging times. He moved back to LaGrange after his retirement in 2011, where he has been ever since. Since moving back to LaGrange, Nichols has spent time engaging in other activities outside of the school system, until he was contacted one week ago.

“I knew that the board was about to make a change. I was called a week ago Monday and asked if I would come in and have a conversation with them,” Nichols said after Monday’s board meeting. “When I retired from Mobile in 2011, we intentionally came back here. This is what we consider home,” Nichols said. “This is my home system, and I was not going to let it flounder. They [the board] said they needed me, and I said, ‘Well, okay, I’ll do it.’”

Nichols takes the position begrudgingly, stepping into the role out of a sense of duty to the school system and community, but understands better than most that an interim superintendent is not what the school system or the county need on a long-term basis.

“I didn’t want this and look forward to getting out of it as quickly as we can,” Nichols said. “[But] my whole life has been trying to help communities get better, I’ve been very busy in this community making sure this community grows and gets stronger. I didn’t want it to take a step back.”

Nichols has 25 years of superintendent experience.