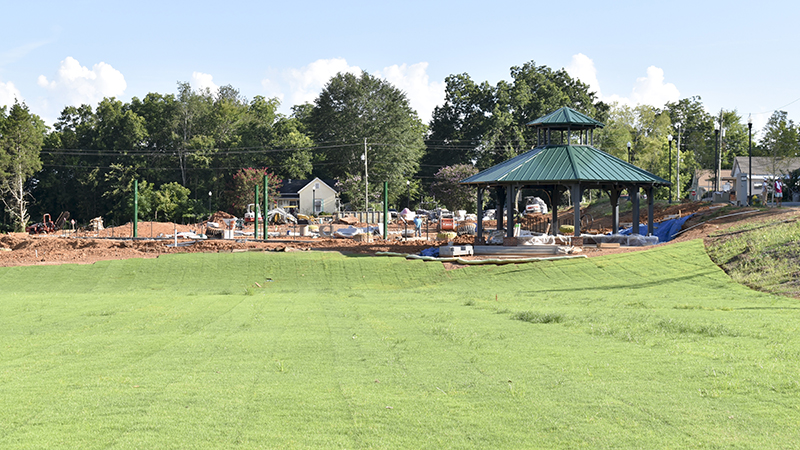 Construction continues at Southbend Park and is expected to be completed by the end of September. --Alicia B. Hill

Construction on Southbend Park in downtown LaGrange is nearing completion. Work on the gazebo, dog park, playfield and playground is expected to be done in about a month, depending on the weather.

The opening date for the park was delayed due to rain throughout the summer, but according to Speer Burdette, the president and general manager of The Callaway Foundation, construction on most areas of the park should be finished by the end of September.

“We were supposed to open in August, and we are a little behind because of the rain,” Burdette said. “But, it should be complete with everything but the skate plaza by the end of August to mid-September, depending on weather. We are very close.”

The new skate plaza connected to the park likely will not open until near the end of the year.

“While we had hoped to be under construction immediately after awarding the bid in late June, the qualified low bidder, New Line Skateparks, wasn’t able to begin the project that quickly due to conflicts with their other scheduled projects,” City Planner Leigh Threadgill said in an email. “New Line is a niche skatepark contractor and had other commitments that prevented an earlier project start date. Fortunately, construction is just around the corner and should be complete by Christmas.”

The City of LaGrange finalized plans for the skate plaza portion of the park in February with the help of Kanten Russell of Stantec Inc. and local skateboarders, and the city received the Tony Hawk grant to build the plaza in March. The city has also aided in the construction of the rest of the park.

“We’ve had a great partnership and coordination with the city, working together on getting this done,” Burdette said. “We have shared some cost where the city can help us with manpower and things they can do. They did, and in turn, we are doing some things to help them as well.”

The park is being built by The Callaway Foundation on a 12-acre piece of land near Wild Leap Brew Co. and District 4 Public Health. After construction is complete, The Callaway Foundation plans to lease the park to the city for a nominal fee — which has not yet been announced, but may be as little as $1 a year plus maintenance, based on previous agreements.

The park is already visible from some parts of Lafayette Square, and local leaders have expressed hopes that it will further boost rejuvenation efforts in that part of LaGrange.

“You already are seeing a resurgence or revitalization of the south end of downtown with the brewery and Overlook Park,” Burdette said. “I think it just changes the whole perspective of our downtown. You can literally walk out of the Courtyard by Marriott hotel and look south down Bull Street, and your view now takes you all the way to Southbend Park. You can see the gazebo. As all that becomes green and the playground equipment [is installed] it will be a really nice extension of the downtown. So, with Sweetland on the north and Southbend on the south, we really have a park on either end of our downtown footprint.”

Previously, the area was largely used for industrial purposes with companies like Davidson J.G. Jr. Electrical Contractor and Daniel Lumber Company using the property near the park, so Burdette hopes the decision to build a park on the south end of downtown will change the perception of where downtown LaGrange ends.

“It has taken a very industrial area and made it a very public park for the use of our citizens,” Burdette said. “It is a nice transformation, and a nice extension of our downtown from where we previously had stopped.”

Sidewalks for the section of The Thread that goes through the park are already poured in most parts of the park, and the gazebo and plantings are also nearing completion. However, some parts of the park’s plan likely won’t be installed until after the skate plaza is complete, according to Burdette.