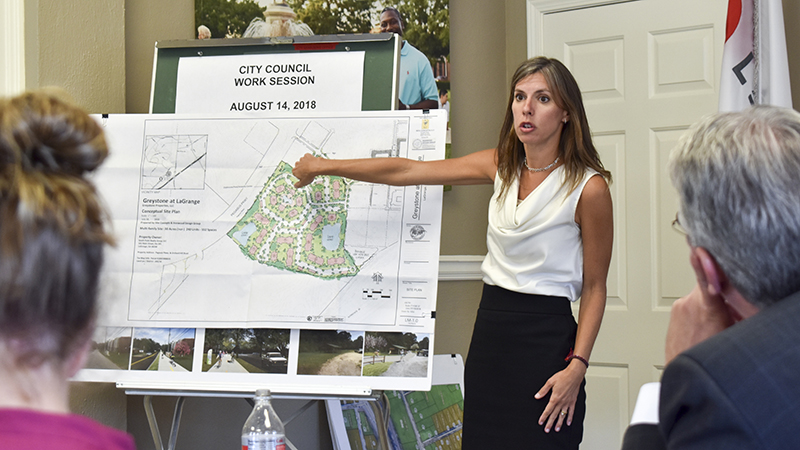 The LaGrange City Council got a peek at a proposed development on Pegasus Parkway near Great Wolf Lodge on Tuesday when it reviewed a rezoning application that would allow apartments to be built on land that is currently zoned general industrial.

The property is owned by Southpoint Realty Group, who according to the proposal, hopes to build an apartment complex consisting of 240 units and 552 parking spaces near the intersection of Pegasus Parkway and Orchard Hill Road.

“This comes from Ron Orr working with a developer out of Columbus who wants to build 240 units on about 30-acres of property, basically where Orchard Hill Road dead ends into Pegasus Parkway now,” said City Planner Leigh Threadgill. “… As part of that, they are planning to extend Orchard Hill Road across. That would be a continuation of that existing roadway, and that will be the access to the property. There will not be any access points from Pegasus Parkway.”

According to Threadgill, the planning and zoning board recommended conditional approval with requirements placed on building materials and space. The density would be below the city’s density requirement, and the development plan includes at least 5 percent open space for recreation.

The extension of Orchard Hill Road was of great interest to the council. The new road will come out near a new Wendy’s, according to Threadgill.

Council Member Mark Mitchell asked if the road would have a mandatory right hand turn for safety. However, the nature of that intersection was unclear on Tuesday, and because the Georgia Department of Transportation is over Whitesville Road, the City of LaGrange would have limited control over the intersection. Some safety features are expected at the intersection though.

“[The developers] are working with [the Georgia] DOT currently,” Threadgill said. “They are over all of that. They are showing a [traffic] light.”

The city held a first reading on the proposed rezoning Tuesday night, and the LaGrange City Council plans to vote on the rezoning on Aug. 28 at 5:30 p.m. at 208 Ridley Ave.