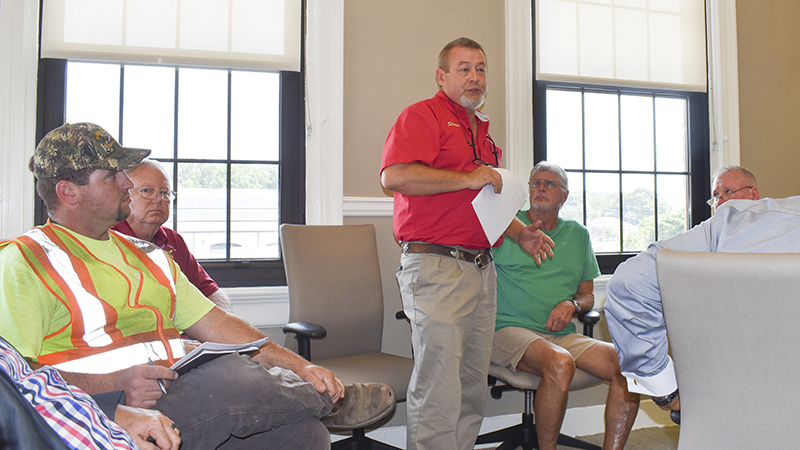 Shane Banks of the LaGrange Shrine Club talks at the LaGrange City Council work session on Tuesday. The Shriners are asking that the council consider stronger solicitation regulations in roadways, instead of getting rid of all roadway soliciting. --Alicia B. Hill

Roadway solicitation could be heavily regulated under a proposed city ordinance.

On Tuesday, LaGrange City Council considered a substitute ordinance that would ban solicitation in roadways. The council also heard a request asking for more regulation in roadways, instead of an outright ban.

The council discussed the possibility of banning roadway solicitation in July following citizen complaints, and Chief Lou Dekmar said the LaGrange Police Department recommended a ban at that time.

One of the top concerns discussed was the possibility that a child might get hit by a vehicle.

The current ordinance only allows people 16 and older to be in the roadway when traffic is not moving, but enforcing the ordinance has proven difficult.

“We talked about three weeks ago the current status of the ordinance, which allows roadside solicitation with certain rules and standards under permit,” LaGrange Mayor Jim Thornton said. “Basically, I think the feedback from the police department was that it is pretty hard to enforce. If there is a violation of the requirement to be out of the road when traffic is moving, which is what the current ordinance says, a call comes in and by the time the police get there it is no longer an issue. So, enforcing is an issue.”

Groups are required to have a permit to solicit at traffic lights under the current ordinance, so the city was able to reach out to the organizations that have raised money in the roadways in the past to let them know about the possible change.

“I spoke with seven of the organizations,” Community Development Director Alton West said. “There are eight of them total, and I could not reach one of them. I spoke to them and told them about the public hearing. Most of them said that they would show up.”

The city is not legally required to hold a public hearing for the change, but Thornton suggested one to allow for public comment. However, the public hearing and reading of the ordinance were delayed due to a request from the LaGrange Shriners Club, which is asking the city to consider stronger regulations.

“The permits [to solicit in the roadway] are free right now, but we would gladly pay $10, $20 if you [on the council] want for us to get a permit or whatever it takes,” said Brian Hester, the president of the LaGrange branch of Shriners International. “That [prohibition] would take away a lot from what we do because we stay away from your car washes, your attic sales. We stay away from that because that is what other organizations like to do. This is our main way of raising money for the hospital.”

Council Member Mark Mitchell asked if a comparable amount of money could be raised in front of local shopping centers, which would be a safer environment.

“I still think it is a safety issue,” Mitchell said. “I went to school with [members of the Shriners], but it is a safety issue. I think your organization is something that most people agree with what you are doing and support what you are doing. I have a hard time believing that Walmart won’t welcome you with open arms, and [believe] that Kroger and other shopping centers will allow you to get out of the road.”

However, Hester said that donations in front of stores were typically much lower and could negatively impact how much money Shriners are able to raise. He said the Shriners typically raise between $15,000 and $20,000 for Shriners hospitals in the roadway, but raise considerably less elsewhere.

Hester said the Shriners would be willing to provide insurance to cover Shriners in the roadways, which would protect the city from liability if one of them were to get injured. Thornton noted that requiring insurance would most likely prove prohibitive to smaller organizations.

“We raise money in case your kid, your grandkid, your sister’s kids get hurt, crippled, born with something that is crippling or dismembered,” said Shane Banks, a member of the LaGrange Shrine Club.

“There are a lot of things that people don’t see that we do, so we raise money by standing in the streets. We don’t want to lose this. We are begging.”

Banks requested that the council consider higher age limits, a permit fee, requiring a nonprofit organization number and insurance to both limit groups soliciting and make it safer.

Council members LeGree McCamey and Jim Arrington supported the idea of adding restrictions to make it safer. Council Member Tom Gore requested more information on proposals before making a decision. Mitchell generally opposed solicitation in the roadways, but asked that if it was permitted that the ordinance be easily enforceable.

“I ask for us, but I still fuss because I don’t want to be the reason that one of these kids go to our hospital,” Banks said.

State law does not allow for solicitation in roadways unless specifically allowed under local ordinance.