Werner Abraham Linz, MD, FACS, died at age 90, on Aug. 14, 2018. Dr. Linz, born in Waltershausen, Germany, on April 29, 1928, was the son of the late Leopold and Rita Linz. He emigrated to Albany, Georgia, in 1937, with a group of refugees as part of the Kinder transport. Dr. Linz graduate from Albany High School in 1945 and attended the University of Georgia, earning an AB degree in 1948 before entering the Medical College of Georgia where he earned an MD in 1952. Dr. Linz did his post graduate training in surgery and urology in Philadelphia, Penslyvania; Richmond, Virginia; Durham, North Carolina from 1953 to 1960 while also serving as a lieutenant in the U.S. Navy during that time.

Werner came to LaGrange in July of 1960 where he joined Dr. C. Mark Whitehead Sr., in urology practice at the Clark-Holder Clinic.  He retired from active practice in 1996. 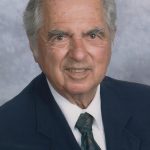 He was certified by the American Board of Urology in 1967 and became a Fellow of the American College of Surgeons. Dr. Linz served on the governing board of the Clark-Holder Clinic for three years. He served as president of the Troup County Medical Society, chief of staff of West Georgia Medical Center and as district director of the Medical Association of Georgia. Dr. Linz was chair of the quality assurance committee of West Georgia Medical Center for eight years and served as Troup County Medical Society alternate delegate to the Medical Association of Georgia for 14 years.

He married the late Ila Fay Adams in 1955, and they had three children. After divorcing in 1980, Dr. Linz married Catherine Boddie Kendall in 1982.

He was a member of St. Mark’s Episcopal Church and served on its Vestry. Dr. Linz also belonged to numerous local state and national professional organizations. He was active in the Georgia-Alabama Antique Automobile Club, LaGrange Kiwanis Club and the Royal Scottish Country Dance Society to which he contributed five new dances. He also published two books of light verse and played the concertina. Other interests included hiking, bicycling, photography, camping and fishing. He was particularly proud of being a founding board member of the LaGrange Symphony Orchestra serving from 1989 to 2014 also serving as president of their board 1998 to 2000.

He is survived by his wife, Catherine Boddie Linz; daughter, Carol Kiefer; two sons, Thomas and William; and step-son, Nathan Boddie; as well as daughters and sons-in-law, grandchildren, great grandchildren, nieces and nephews and an extended family.

Funeral services for Dr. Werner A. Linz, MD, FACS, will be held at 4 p.m. Friday at St. Mark’s Episcopal Church with The very Rev. R. Allen Pruitt, rector officiating. The family will receive friends at the parish hall on Friday from 3 p.m. until 4 p.m. Private family interment will follow in the Boddie Family Cemetery

In lieu of flowers, contributions may be made to the LaGrange Symphony Orchestra or a favorite charity in memory of Dr. Werner A. Linz.