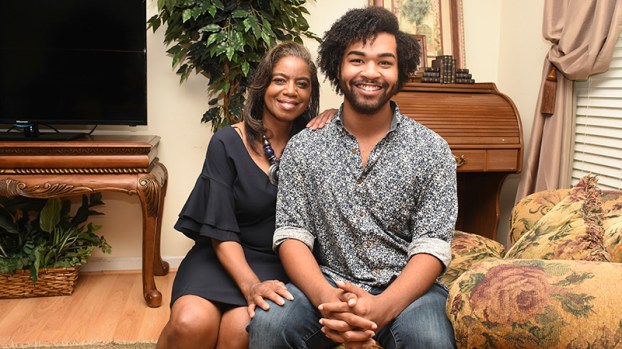 Audrey and Jordan McCray. pose for a photo. Jordan donated his kidney to his mother this summer. (Daniel Evans | Daily News)

‘I needed to do something’: Son donates kidney to ailing mother

Five years ago, Audrey McCray wasn’t feeling good and rushed to the emergency room to find out what was going on. She got bad news that day, as doctors told her she had kidney failure.

“I was being calm [in her hospital room], and then I went down the hallway and had a mental breakdown,” said Audrey’s son, Jordan McCray. “I needed to do something about this. I went back and talked to the doctor, and he said, ‘These are things we can do.’ He said kidney donation, and I unbuttoned my shirt and was like, take it now and give it to her now.”

However, Jordan, who was 16 at the time, wasn’t old enough to give his mom a kidney. Audrey was put on a donor list, and she spent almost five years waiting on a kidney to become available.

Jordan, now 21, eventually got tired of waiting. Earlier this year, he decided he was going to give his mom one of his kidneys, and the transplant took place on July 10.

“He just came to me one day and said he still wanted to do the kidney transplant,” Audrey said. “I asked him several times, ‘Are you sure you want to do this? And he said yes.’”

Doctors had to test Jordan to make sure he was healthy enough for the procedure, and they couldn’t officially tell Audrey where the kidney she was getting came from. However, Jordan got the news he was a match just a day or two before Audrey got the call saying they’d found a kidney for her.

“I just screamed at the top of my voice,” Audrey said. “I was like ‘Oh my goodness.’”

A month after the procedure, both mother and son are healthy and doing well. Audrey, a teacher at Hillcrest Elementary School, said she’s still restricted on some things and won’t return to work until Oct. 12, but she’s feeling great.

She gets emotional when she thinks about the gift her son gave her and the way it has changed her life.

“When I was pregnant with Jordan, that’s when the kidney problems started, and all through my pregnancy, I was still going to see a kidney doctor. He gave me a choice, and I’ve never told anybody this, but he said ‘you’ve got two things you can do,’” Audrey said, tears running down her face. “You can have this child and later on you might have kidney problems, or you cannot have this child. And there was no way that I was going to go through an abortion. It’s full circle now. By me saving his life, he saved mine.”

Jordan said there was never a question in his mind about what he should do. He said, it was an easy decision.

Audrey also has a daughter, Taylor, who teaches at Ethel Kight Elementary. Given the trouble Audrey had during pregnancy, she said she didn’t even let Taylor consider giving her a kidney.

Instead, she was thankful when Jordan spoke up.

“God gave me an awesome child, and in return, he gave me something awesome,” Audrey said. “He gave me life again.”

Audrey said the staff at Hillcrest Elementary School has been extremely helpful over the years. Her schedule was set so that her planning period was in the afternoon, so that she could leave for dialysis. She got to work at 6 a.m. on those days, so that she still had time to plan.

Family, friends and co-workers have also been bringing her meals.

“We’ve had a lot of support, and it makes you feel good when you’re not alone in a situation like this,” Audrey said.

At 52, Audrey said her life will be completely different from now on. Not only will she not have to worry about dialysis, but soon she will get back to the gym and can eat differently.

“I can now go on vacation and not have to worry about doing dialysis,” she said. “I haven’t been on vacation in a while. I can travel and do a lot of different things.”

Audrey said she wants to help people who are on dialysis or are dealing with kidney issues. Along with teaching, that’s how she plans to give back in the future.

“I want to be an advocate for those who are going on dialysis, are doing dialysis, and those who want to have a transplant,” Audrey said. “I feel like that’s something God is calling me to do.”

The LaGrange City Council heard about some of the plans for HOPE Academy and things the alternative school needs during... read more