Dancing the night away: Community raises thousands for The Thread 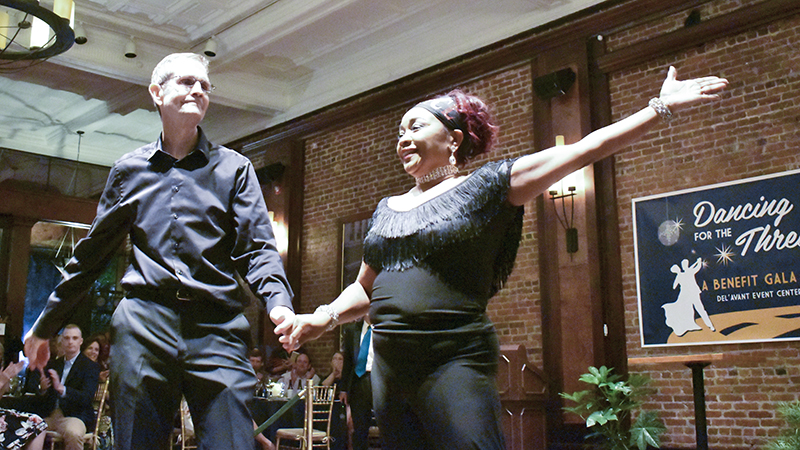 Del’avant Event Center was standing room only Saturday night, and even that was limited as the community came out in force to show their support for The Thread trail at the Dancing For The Thread benefit gala.

Early estimates show that the event raised more than $17,000 for The Friends of The Thread. The group advocates for the construction, maintenance, safety, expansion and use of The Thread through oversight, fundraising, maintenance and community involvement.

Zsa Zsa Heard and David Traylor won the dance competition with the highest score based 50 percent on judge scoring and 50 percent on votes, with $1 equaling one vote. Their judge’s scores were sevens from all three judges, which was especially impressive considering Traylor had to step in to fill the spot of Cody Foote at 10 a.m. on the day of the event. When he learned that Foote was unable to compete, Traylor said he knew he had to step in so that Heard could take part in the contest.

Both Heard and Traylor said they were excited to see what The Thread is doing for the community and its residents.

“A piece of The Thread runs near the housing authority, so that is great,” Heard said. “We can now be connected to the entire community, and it also encourages healthy lifestyles. There are residents getting healthy. The community is getting healthy, and we’ll just meet up one day and walk those 29 miles.”

Throughout the night, contestants emphasized the trail’s ability to provide a free, safe place for everyone in the community to exercise and have fun.

“I’m just really excited about it,” Traylor said. “It adds a lot to the city and to the community and brings us together. I think it is a great thing.”

Pauley and Bordona received the highest judge’s scores for their cha cha, with the judges awarding them a 9.8, 9.5 and 10. They received the only 10 of the night. Pauley said that the dance took a lot of practice and praised the progress of The Thread, which he has been able to watch firsthand from the steps of LaGrange High School, where he teaches.

“It has been a privilege to watch the progress of this as I stand on the steps of LaGrange High School and watch literally all walks of life come across it,” Pauley said. “It is a very believable project. As you’ve heard from the other five dance couples, it has been uniting.”

The event sold out of tickets days in advance, seeming to confirm the community’s continued support for the project. Despite its progress, The Thread project is still relatively young.

“It was three years ago — almost to the day — that an email went out to Mayor Thornton and to Patrick Crews, the county chairman, suggesting that maybe we should build a trail, and that it would be good for us,” said Bob Goehring, who originally proposed The Thread. “Here we are three years later with a 29-mile approved plan. [There are] four miles in the ground, and another mile will be complete soon, and we are well on our way at a remarkable rate of progress.”

The Friends of The Thread was founded in July 2016, according to Goehring. LaGrange Mayor Jim Thornton, who served as the event’s emcee, highlighted the fact that the project has been led from the beginning by community members.

“At the end of the day, this was a citizen led, citizen initiated project,” Thornton said. “Had Bob not sent that email and invited me and Patrick to come have breakfast with him, we might not be here tonight. It took his initiative.”

Thornton also stressed that the multi-use trail was the biggest item by dollar amount on the Special Purpose Local Option Sales Tax, when the tax was renewed by a record margin last year, and spotlighted the community’s role in ensuring the project moved forward.

“It takes a community, and you deserve a lot of thanks and credit not only for your support tonight, but for the support that many of you provided in this very room when we had the town hall session about two and a half years ago to see if this was something that the community would embrace,” Thornton said. “We filled this room with 300 people for a town hall meeting, and every single one of the comments about The Thread was positive.”

Friends of The Thread Executive Director Natalie Hale said that the group hopes that this will be the first of many annual galas to raise money for The Thread. To learn more about The Thread, visit Thethreadtrail.org.