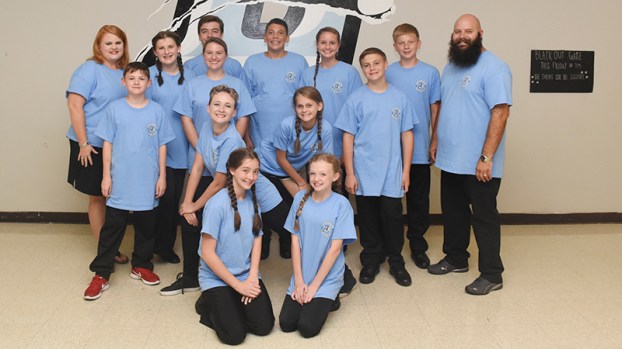 The Lafayette Christian marching band, which started this year, poses for a picture before its first football game Friday night. The band has 12 members and was started by band director Trinity Pike, pictured far right. --Daniel Evans

It was a night of firsts Friday night at Lafayette Christian School. Not only did the Cougars play and win their first 11-man football game, but LCS also had a marching band for the first time in school history.

The 12-person Cougar Marching Band performed at halftime and throughout the night during a 37-32 LCS victory.

“There’s a lot of new for us this year, and it’s going to be fun,” said band director Trinity Pike. “We’re going to have a good time for sure.”

Pike marched in The Redcoats marching band at the University of Georgia during college and has helped with the Troup County High School band the last few years. This year he moved to Lafayette Christian and put in to start a band — the first in school history and the only band in the Georgia Independent Christian Athletic Association, the league LCS participates in.

“I had a really good response from parents, from students, from teachers — everybody seems to be really excited about having a new program here and being able to do something fun, exciting and engaging at football games,” Pike said.

Many of the students had been waiting for the day a marching band was formed.

“I was excited. I’ve been waiting,” said ninth grader Luke Abel. “I’d like to see this continue and grow.”

Pike ended up with a dozen students, ranging from seventh graders to juniors, but the band is embracing its youth and small size.

Only one band member had ever been in a band before, so Pike had to teach many students from scratch during summer camp.

“We got sunburned. We sweated, and we learned new music and some even learned new notes. Like I said a lot of them are young,” Pike said. “We did different things they’ve never done before, like teaching them how to march, stand at attention and having the pride that comes along with being a team like this.”

With the small group, Pike said he had to be creative with formations and the overall show theme, which is the element of surprise.

“I’m used to working with about 100 kids… and you always see the different formations you can do on the field with the kids, so I had to rethink how I was going to make it visually entertaining as well as audibly entertaining,” Pike said. “Basically, I’ve had to write a stage show for the field.”

Pike said throughout the year the band will add in new elements to keep the halftime show entertaining. TJ Todd, an eighth grader, said he thinks people are really going to enjoy the show.

“I think people are going to think that it’s a great show, and they’re going to like it and remember it,” Todd said.

The band also played throughout the game. The Cougar Marching Band played the fight song after touchdowns and wished happy birthday to several members of the crowd with the happy birthday song.