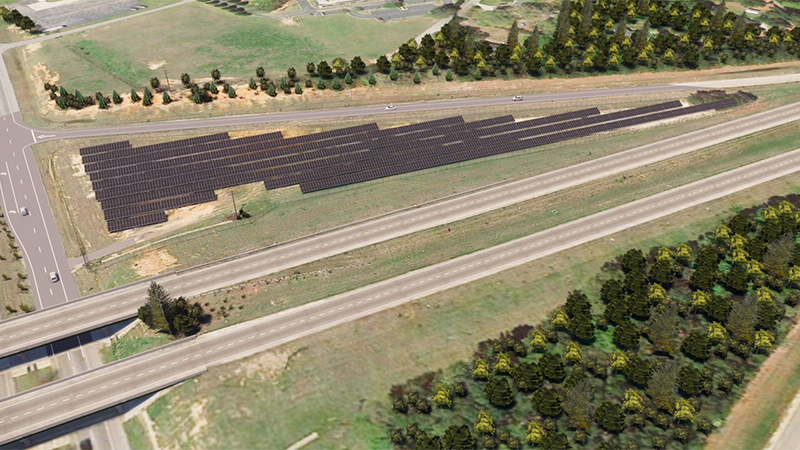 Renderings of the exit 14, solar panel project are shown on Interstate 85. When finished, this will be third right-of-way solar installation in the country. --Contributed

The Ray in Troup County is once again leading the way for the nation with a one-megawatt solar array on Georgia Department of Transportation property at Exit 14 of Interstate 85 to be installed this fall. The installation will be the third right-of-way solar installation in the country and the first in the nation to use native, pollinator friendly flowering plants as ground cover.Georgia Power will construct, own and operate the solar array.

In addition to providing clean energy, the solar array will create an environment for local pollinators for at least 35 years, which is the time specified by the contract.

“The Ray, Georgia Power and Georgia DOT have guaranteed 35 years of valuable habitat for honey bees, monarch butterflies and other pollinators that are critical to the success of our neighboring farm community,” said Harriet Langford, president and founder of The Ray. “And it’s going to be a beautiful addition to the interstate roadside.”

The program is budgeted at a total cost of $2.86 million, including pollinator friendly plantings and ramp-way lighting. On Tuesday, the Georgia Public Service Commission authorized funding for Georgia Power to construct and operate the one megawatt solar array in the right-of-way.

“The portion of Interstate 85 in West Georgia known as The Ray is a living laboratory for many agencies in our state to explore emerging technology,” said Georgia PSC Commissioner Tim Echols. “The solar and pollinator project we approved [Tuesday] may be something that Georgia DOT duplicates across the state.”

The project a partnership between GDOT, Georgia PSC, Georgia Power and The Ray.

The solar array will be made up of 2,600 high-efficiency panels, which will begin producing an estimated 946 kilowatts to direct current or 800 kilowatts to alternating current beginning in early 2019.

“The Ray solar array and pollinator garden pilot project is an opportunity for Georgia to study new applications in renewable energy and conservation,” said Georgia PSC Commissioner Tricia Pridemore, whose district includes The Ray. “I look forward to the results as we shape Georgia’s future energy needs.”

Residents and visitors alike have probably noticed signs designating the 18 miles of Interstate 85 that passes through Troup County as part of The Ray, which is serving as a testing ground for environmental technology that some believe could save the world. This solar array is the next part of that project.

“Interstate highway land is an under-leveraged asset,” said Allie Kelly, executive director of The Ray. “We believe that there is a natural connection between energy and transportation. Not only can we safely generate renewable energy using transportation infrastructure that we already own, but departments of transportation all over the country have the opportunity to tap into a brand-new revenue source through land leases, lower energy costs, credits and other business models that the federal government endorses.”

According to information from The Ray, GDOT extended a 35-year license to Georgia Power to use the property and Georgia Power will install and operate LED lighting on and along the four quadrants of Exit 14, which is currently unlit.

“Through the leadership of the Georgia Public Service Commission, Georgia Power is able to collaborate with a tremendous team of partners, including The Ray, Georgia DOT, Electric Power Research Institute and others to continue our efforts in researching and demonstrating innovative solar technologies,” said John Kraft, a Georgia Power spokesperson. “We look forward to gaining valuable experience with this pilot project about the potential for solar generation along the highway and pollinator-friendly ground cover, which is intended to improve overall project performance and our environment by reducing erosion and supporting the local ecology.”

GDOT likewise celebrated the infrastructure improvements connected to the project and their possible impact on taxpayers.

“This project is an example of how Georgia DOT is doing more with Georgia’s infrastructure investments. Increasing our infrastructures productivity is smart and shows our responsibility to the taxpayer,” said Georgia DOT board member and former member of congress Lynn Westmoreland. “The Ray is helping us lead the nation.”

So far, The Ray already includes native plantings for landscaping, a solar powered car charging station, solar roadway sections and a tire pressure gauge at the welcome center near the Georgia/Alabama state line.

The road also takes advantage of a variety of native planting to encourage pollinators along the section of interstate. The Ray has received international recognition for these projects, which partners have said are likely to be adopted elsewhere as well.