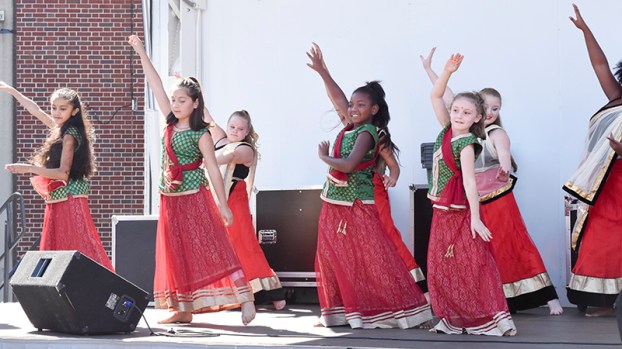 Performers from the Royal Academy School of Dance dance on the stage at the 2017 LIFE Festival. (Daniel Evans | LaGrange Daily News)

Whether you’d like to enjoy food from the far reaches of Tibet or see a children’s Bollywood-inspired dance performance from India, the LaGrange International Festival on Saturday, Sept. 8, will give you a taste of the many cultures that bring diversity to the LaGrange community.

Sponsored by the LaGrange International Friendship Exchange, or L.I.F.E., the festival will be held from 3 p.m. to 7 p.m. on Main Street in downtown LaGrange.

In addition, L.I.F.E. invites the public to a Student Art Show from 5 p.m. to 7 p.m. on Friday, Sept. 7, at the Cochran Gallery on Lafayette Square. The community also is invited to “Music for Peace,” a free international concert on Sunday, Sept. 9, from 7 to 8 p.m. at LaGrange College’s Callaway Auditorium.

About 20 countries will be represented by individuals with ties to both Troup County and the country their booth represents.

Most booths will feature free food so community members can taste an expansive array of international fare.

Anahata Iradah, a Hogansville resident originally from London, will represent Tibet at the festival and wear a traditional Tibetan chupa. Iradah teaches meditative dance all over the world, and after being invited by the Dalai Lama, she intermittently spent 10 years teaching sacred dance to Tibetan women living in exile.

While in Tibet, she met a young boy named Tsering Dorjee, whom she now considers her “heart son,” she said. Dorjee now lives in Minneapolis, Minnesota, and is flying to LaGrange with his own son to be a part of the LaGrange International Festival with Iradah.

“He has come to the festival with me the past two years, and we had a great time serving momos and sharing Tibetan stories with the public,” Iradah said.

“It was a sweltering hot day at last year’s festival, but we endured wearing our warm chupas for the sake of being totally traditional.”

This is the third year of the LaGrange International Festival, which had about 3,000 in attendance in 2017.

In addition to food, the festival also will feature games for children, face painting, live music and entertainment.

A “passport” will be available for children to take to each booth and ask for the capital city of each country.

Sunday’s concert will mark the 11th year that L.I.F.E. has been a part of The September Concert, a national grassroots charity effort that responded to the tragic events on Sept. 11, 2001, by holding community concerts worldwide. Founders of The September Concert Foundation and Sister Cities International established the program to bring communities together through music, reaffirm the hope for peace and celebrate our universal humanity.

LaGrange is one of the few cities that still celebrate the concert every year.

The results are in!

After all expenses were paid, The Friends of The Thread raised more than $35,000 with Dancing For The Thread. The... read more