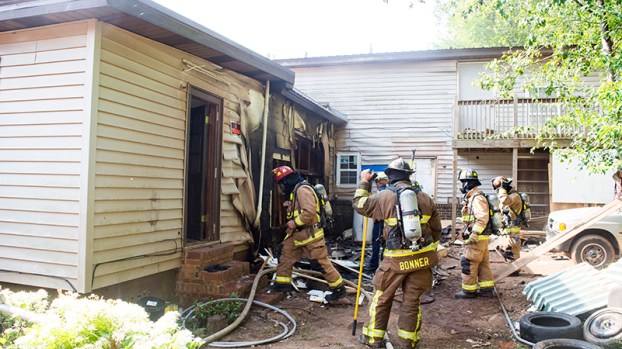 Firefighters evaluate the damage at a house on Juniper Street. --Daniel Evans

A house fire on the 1300 block of Juniper Street appears to have started on the outside of the building.

The LaGrange Fire Department responded to the call Saturday just before 10 a.m. Nobody lives at the house, which is currently being renovated, according to Deputy Chief John Brant.

“It looks like it started outside. They are doing some remodeling,” Bryant said. “There is no power to the structure whatsoever. It does have a water connection, but we got the water shut down and did a primary search of the structure.”

Almost all of the damage was to the outside of the structure, Brant said. There was some damage in the kitchen and smoke had caused a little damage as well.

Brant said nobody had been working at the house Saturday morning before the fire started.

Go Realty was the team holding the trophy at the end of the day, but First Choice Women’s Center was... read more