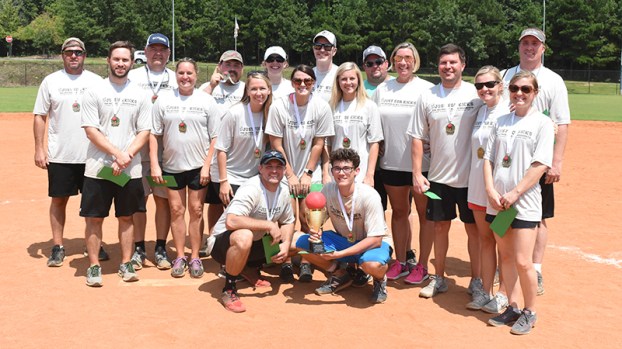 Go Realty’s team poses for a picture after winning the Not Just for Kicks, Mother of All Kickball Tournaments championship Saturday at Shuford Fields. --Daniel Evans

Go Realty was the team holding the trophy at the end of the day, but First Choice Women’s Center was the overall winner of Saturday’s Not Just for Kicks, Mother of All Kickball Tournament at Shuford Fields.

The tournament is a fundraiser for the unplanned pregnancy center, but it also serves as a way to get word out about the services they offer. Many churches and businesses took part, and so did the Troup County Sheriff’s Office. It was unclear how much money the tournament had raised, but organizers said it was mostly about community involvement.

“It makes us very appreciative, but that’s why we started this event — not just a fundraiser but also as an event to let people know about us and what we do here in the community,” said Michelle Thompson, who organized the tournament.

Although the tournament was mostly for fun, it also turned competitive. In the championship game, Go Realty was down to its final out before rallying for three runs in 3-2 victory over LaGrange Women’s Center.

Go Realty is calling it a worst to first redemption story. The team participated last year but didn’t win a single game.

Caysi Brooks-Swol was credited with organizing the Go Realty team and making sure the team took it a bit more serious in 2018. She said Go Realty was happy to support First Choice Women’s Center and plans to have the same team back again next year.

“We want to make a difference in our community, and we are willing to donate our time to do that,” Brooks-Swol said.

The tournament had one more team than last year, but organizers believe it could grow even larger in future years.

“We could do at least 24 teams at this facility, but if we grew it any larger we could move over and use the softball and the baseball facilities,” Thompson said. “We are definitely not maxed out. We definitely want to grow more teams.”

‘This is not a negotiation’: Pugh was asked to resign

Former Troup County Schools Superintendent Dr. Cole Pugh was given an ultimatum, resign or face the termination of his contract.... read more