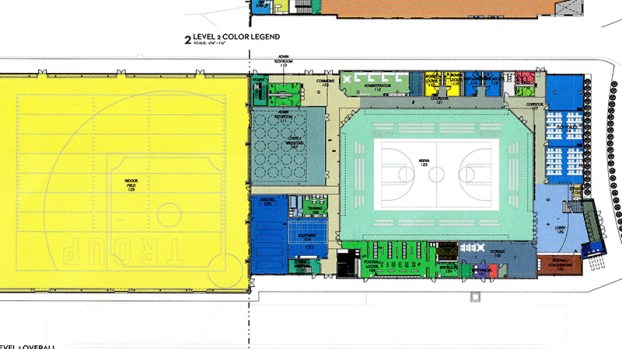 For the second time in a year, the Troup County School Board voted to pay more than originally budgeted for the gymnasium at Troup County High School.

The school board unanimously approved a guaranteed maximum price of $14.1 million for the Troup gym Monday, an increase from the $12,662,040 approved in October 2017. The increased cost was blamed on tariffs on steel and other construction material, which is driving up the cost and resulting in higher wages for subcontractors. Curt Giebeig, director of preconstruction for RA-LIN — the contractor constructing the gymnasiums — said that the cost of steel has seen a 14 percent rise since they started the project. Both new gymnasiums — Troup High and LaGrange High — were discussed during Monday night’s special called meeting, but Troup received most of the attention, since it is already underway and has the earlier completion date.

No action was taken on the LaGrange High gymnasium, which was approved with a $13.4 million construction budget last year. The gyms were originally estimated to cost $9 million apiece, while current projections place the combined cost around $27 million, approximately $9 million over the original projections. The school board went back and forth on the cost of the two gymnasiums last year, even tabling the vote for two months before approving both in October. The board thought it was approving a guaranteed maximum price in October, only to see the price increase 10 months later, leading to lengthy discussion Monday night.

“The name seems to be a misnomer,” said board chairman Kirk Hancock. “I don’t see anything guaranteed. Every time we come back, it’s more and more.”

RA-LIN’s Derek Smith, the vice president of the education division, said that it was impossible to predict such a price increase when original estimates were given.

“Back in October 2017, there was no way for a GMP [guaranteed maximum price] because the development of documents wasn’t there yet,” Smith said.

“The design wasn’t complete. A lot of elements weren’t there. We are in August of 2018 and in October of 2017, that GMP was a budget. I’m telling you right now, because we’ve gone through all the stages, that $13.9 million is your guaranteed maximum price.”

The board voted for $14.1 million to add a little cushion to the budget, just in case. Board member Brandon Brooks asked about a 3.7 percent fee in the contract, which RA-LIN adds to the price for work completed. He said it’s unfair that the school system has to pay the extra cost for the material, plus extra to RA-LIN because of those increased costs.

“We are paying you guys 3.7 percent on that, and if these are actual real costs, you add that to this real cost, we are paying tens of thousands more now just because steel and concrete have gone up,” Brooks said. “As a business guy, just because costs go up, doesn’t mean we should have to pay you more because the costs are still the same, and we’re paying for them.”

Smith said a budget was approved in October, not a GMP. In most cases, that $12.6 million would’ve stayed the same, he said.

“We submitted those numbers over 12 or 14 months ago, at that time with a 12.6 million budget,” Smith said. “At that time, we had no idea we were going to have a new political arena out there, new president, tariffs and all that.”

The board never considered waiting on the projects or changing the design, wanting to follow through on what they’d promised the community in the E-SPLOST vote. However, they did worry about using such a large chunk of the E-SPLOST.

“At some point, we start to run out of money,” said board member Joe Franklin.

Hancock also asked chief financial officer Byron Jones if the school system would have to bond to build both gyms, since work would be going on at the same time. Jones said he would have an answer by the Sept. 17 meeting.

Interim Superintendent Roy Nichols asked that the board be updated monthly on the two projects until they are completed.

LaGrange police are investigating after two men robbed the Pizza Hut on Commerce Avenue before 10 p.m. on Sunday, according... read more