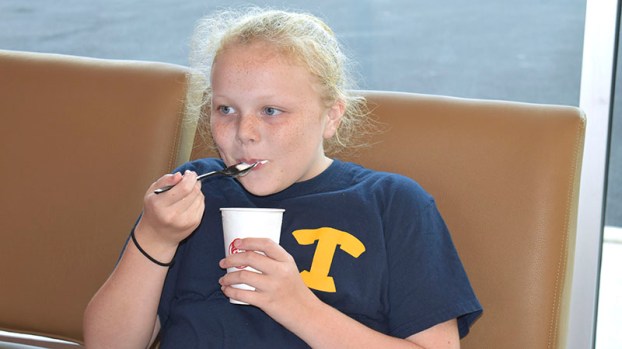 Above, Abbie Kirby enjoys a frosty at the new Wendy’s on Whitesville Road. -- Gabrielle Jansen

Troup County residents will soon be able to enjoy two new Wendy’s restaurants. One of the restaurants with the new design opened on Friday on Whitesville Road in LaGrange, and the other is set to be built at Bass Cross Road in Hogansville.

LaGrange’s new Wendy’s opened quietly on Whitesville Road last week, before the location even had a chance to install all of its planned signage, but management said it is performing well.

“We didn’t even put our sign up out front until Thursday night that we were going to open,” said Matt Parmer, the director of operations for BKR of Alabama, who is over the Whitesville Road Wendy’s. “We’ve been really pleased so far.”

“This is state of the art,” Parmer said. “This is brand new — Wendy’s latest and greatest restaurant design. We have new equipment. We have an open-air dining room, which is very contemporary. We have picnic tables.”

Parmer said that BRK of Alabama was interested in opening a Wendy’s near Exit 13 even before Great Wolf Lodge was announced, but the group only recently gained rights to open a restaurant at that location. BRK of Alabama also owns the Wendy’s on Vernon Street in LaGrange.

“We like the area, and we thought there was room for another Wendy’s in town,” Parmer said. “We thought this was a good triangle where it should be considering [the Wendy’s near] Exit 18.”

The new Wendy’s location in Hogansville is owned by WennMarr Management Co. LLC, who also owns the Wendy’s on Exit 18. The restaurant will replace the Wendy’s that is currently located across the street, which would have been due for a major renovation.

“We’ve been operating the current one up there since 1998, and now we are moving it across the street,” said Matt Van Paepeghem, the franchise owner and president with WennMarr Management Co. LLC who is over the Hogansville Wendy’s. “We bought property across the street because the old one was a remodeled Hardy’s. The restaurant was getting old, and we were going to have to do a major remodel anyway, so we bought property next to Love’s Truck Stop. We are going to build a new image restaurant over there.”