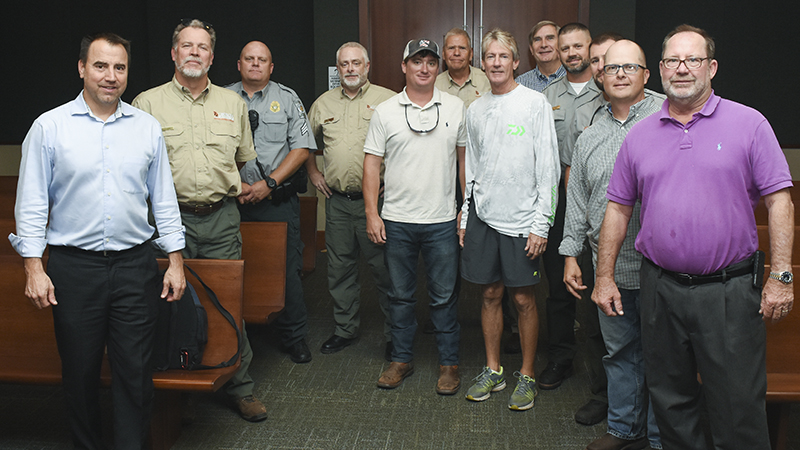 County leaders, biologists for the Georgia Department of Natural Resources and local fishermen gathered Thursday at the Troup County Government Center to discuss the future of West Point Lake.

Fishermen want to see more largemouth bass in the lake as opposed to striped bass — or “stripers” — and organized a meeting between local leaders. They also brought in Dennis Tumlin, executive director of economic and community development for Rhea County, Tennessee and director of Fish Dayton.

Tumlin has been part of Lake Chickamauga’s turnaround, which is located northeast of Chattanooga and is now considered one of the best fishing lakes in the country. Lake Chickamauga regularly hosts major bass fishing tournaments and routinely sees winning tournament hauls that exceed 40 pounds.

“The real power is in a 365-day platform where you are bringing visitors year-round, filling up your hotels, filling up your restaurants,” Tumlin said. “That’s where your impact goes, is the year-round initiative. One event can inject some money in your system, but I like the continual cash flow.”

Tumlin said the lake has become the biggest economic driver for Rhea County, Tennessee, which had the highest unemployment numbers in the state in the 1990s. The turnaround began around 2000, when the lake was first stocked with 2 million Florida-strain fingerlings.

After Tumlin’s presentation, he opened the room for questions, which quickly led to a discussion on West Point Lake. Local fishermen asked if more largemouth bass could be stocked, similar to Chickamauga.

“We don’t recommend doing that many,” said Brent Hess, a biologist for DNR, about that large of a stocking. “In other lakes, you are doing 5 or 10 per acre. It would probably be a little wasteful on the resource.”

“As a biologist, it is not stocking that is going to turn the corner,” said Steve Shleiger, a regional supervisor for the Georgia Department of Natural Resources. “Each lake has its own idiosyncrasies. Probably the main thing is how much fertility the lake has, in terms of how much fish it can produce and what size fish it can produce.”

“Something has got to change here. Why can’t we do a test? What if we say we aren’t going to stock any stripers the next three years? Say we’re just going to focus on the largemouth bass and see how it works out? You have a dying lake out there,” Bearden said. “[Lake Chickamauga] turned the whole thing around now, but they didn’t do it by stocking stripers. There is no Striper Pro Shop. There are Bass Pro Shops all over the United States.”

“I think as a county official, we appreciate the value of the lake and what it means, but to echo what some of these fishermen are saying, a couple of years ago we hosted a big bass tournament and word is they aren’t coming back because they can’t catch any bass,” Crews said. “It has been a deterrent to us to draw another tournament here, and I would say to everyone in this room that we are here to help in any way we can. There are a lot of resources, but I think it is critical from what I’m hearing, largemouth is what is missing at West Point Lake right now. We will do anything we can to help any other department if you tell us what you need from us. But I think our cry is to see those largemouth return.”