Turned wood artists featured at Artisans on the Square in Greenville 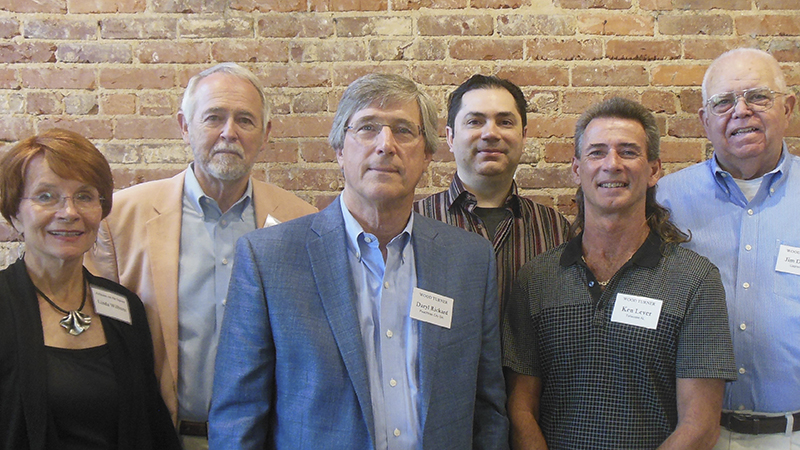 Turned Wood Art exhibitors pose for a photo at Artisans on the Square in Greenville. The show will run from present until Sept. 29. Pictured left to right are Gallery Owner Linda Wilburn, Harold Lawrence of Milledgeville, Daryl Rickard of Peachtree City, Gallery Manager Jaasiel Barrrientos, Ken Lever of Tallassee, Alabama, and Jim DeVane of LaGrange. (Contributed)

The opening reception for Turned Wood Art was held  on Saturday at Artisans on the Square in Greenville.

The exhibit features more than 80 pieces by artists Daryl Rickard of Peachtree City, Ken Lever of Tallassee, Alabama, Jim DeVane of LaGrange and Harold Lawrence of Milledgeville. Their art will be on display until Saturday, Sept. 29, on Thursdays through Saturdays from 11 a.m. to 5 p.m.

Rickard has been turning wood for almost 30 years. He uses mostly native hardwoods and combines wood turning with wood burning, texturing and painting to create works of art. He is a member of the Georgia Association of Wood Turners and the American Association of Wood Turners and has won numerous awards for his turnings in various shows. Rickard is a participant in Southern Hands Artists Studio Tour and you can visit his studio during the annual tour this year on Nov. 10 through 11.  Details can be found at SHASTour.com

Lever is an award winning wood turner and stone sculptor. His website Kenleverart.com  lists 25 awards from shows since 2011. His most recent award was Best of Show at the Columbus Artists Guild Member’s Exhibit for an onyx sculpture on a turned and carved wood base. Lever lived in Germany and visited many European countries while growing up in a military family.  He settled in Alabama after his father was stationed in Montgomery where he finished high school and met his wife.  Lever developed his artistic skills by observing, reading books and trial and error. He continuously experiments with various woods, stones and techniques to create his pieces.

DeVane has been turning wood for 4 years.  He and his wife moved to LaGrange in 2003 after retiring from his home building and remodeling business in Conyers.  DeVane has a Georgia Tech degree in building construction and has continued his love of construction, wood working and furniture refinishing since retirement.  He and his wife bought a historic home in LaGrange and found that remodeling was not feasible, so they demolished it and built a very similar home that fits perfectly into the historic neighborhood.

Lawrence started turning wood after retiring from his 50 year career as a United Methodist minister. He retired in 2015 from LaGrange First United Methodist Church.  He and his wife moved back to Milledgeville where he had also served as minister. The large crowd of LaGrange FUMC members who attended the opening reception is a testament to his ministry there.

Lawrence is also an accomplished lifelong author who has published books of history, children’s books, a five book action/adventure series called “The Steward Series,” five books of poetry and a book of short stories. Another book of short stories is soon to be published. Contact Lawrence at hlawrence079@gmail.com to purchase his books.

For more information on this exhibit and upcoming exhibits, visit Artisansonthesquare.gallery or call Linda Wilburn (404) 286-1328.

Piecing together works of art: Codlin makes collages out…