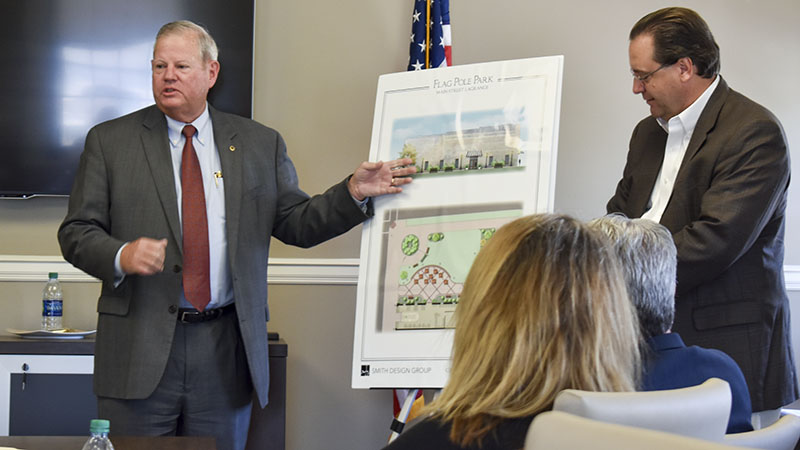 Speer Burdette, president of the Callaway Foundation, presents how Flag Pole Park will look after renovations. --Alicia B. Hill

The future is looking green for downtown LaGrange with major changes coming for one of the city’s smaller parks, Flag Pole Park, which sits on the corner of Lafayette Parkway and Main Street.

The park was created by the Callaway Foundation following a land swap with the city for the property that the city now rents to AMC Classic LaGrange 10. The foundation also received the former fire station on the south side of downtown in the land swap. At that time, the foundation spent approximately $130,000 to create the park in the downtown location as a placeholder for possible future development, but according to discussion on Tuesday, residents can expect to see a flag flying in the park for years to come, along with a variety of updates to encourage regular use of the park.

“We have been presented with an opportunity by the owner of this building [next to the park] that is preparing to put a coffee shop here to come downtown,” said Speer Burdette, the president and general manager of Callaway Foundation Inc. “The idea is that they have asked the Callaway Foundation if they can come out of that building and open into this park. We came back and said we like the idea.”

In addition to a doorway into the park, windows are also expected to be installed for the new business. The Callaway Foundation plans to update the landscaping and layout of the park to encourage active use of the space beyond market days and downtown festivals by installing approximately eight tables, 32 chairs, bike racks and additional decorative and functional lighting. There will also be additional paved space for the tables.

“We are expanding the walkway that is there now, the concrete pavers,” said Skip Smith, the architect of the project. “It will be added onto to create a nice seating area with a brick bench about 18 inches high that will serve as the seating as well.”

Construction on the park is expected to begin in mid to late September.

While visitors to the coffee shop are expected to be some of the most frequent park patrons, the park will be open to the entire community.

“This would be [open to the] public, and it would be used mostly by people from this coffee shop, but if you went across the street to Mighty Joe’s pizza and got a pizza, you could eat your pizza just the same [at Flag Pole Park],” Burdette said. “It is very much like the public spaces behind Charlie Joseph’s downtown.”

He also noted that it would provide young people with somewhere to go in downtown LaGrange.

“When the movie theater came downtown, it brought a lot of kids to our downtown,” Burdette said. “That is a great thing for our downtown to have those kids there, but when they come out of the movie theater or even before the movie, there is really not a place for those kids to go. There are a lot of restaurants, but those are more for adults. There is alcohol in those restaurants, and it is not kid a friendly kind of place. But, this is coffee. It is a place that is public. It is another addition to what people may be able to do in downtown and enjoy.”

Council Member LeGree McCamey asked about lighting in the park to dispel any safety concerns. Burdette assured the council that it would be well-lit, though not quite as bright as the downtown promenade which is more enclosed.

Council Member Nathan Gaskin asked what can be done about crossings on the section of Lafayette Parkway that runs between Flag Pole Parke and the LaGrange Art Museum, where a child was recently hit by a car. According to Mayor Jim Thornton, because the road is part of State Route 109, the city is limited in what changes it can make to the road. Public Safety Chief Lou Dekmar advised the council against a crosswalk at a midway point in that section of road due to low visibility. Council Member Tom Gore and Dekmar both suggested removing parallel parking spaces outside the parking deck to improve visibility and safety for pedestrians.

“Those parking spaces, whenever you park in one of those spaces, you regret it because you can’t get out,” Gore said. “So, I think we should eliminate all of those.”

The park is owned by the Callaway Foundation, and the city leases the property for $1 a year plus maintenance and after renovations the city will take on the cost of fueling gas lanterns in the park. The coffee shop will be tasked with bussing the tables.