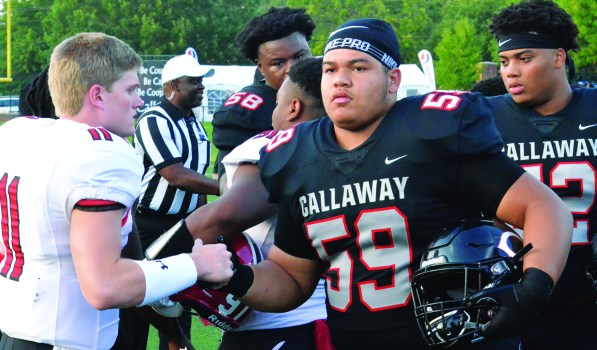 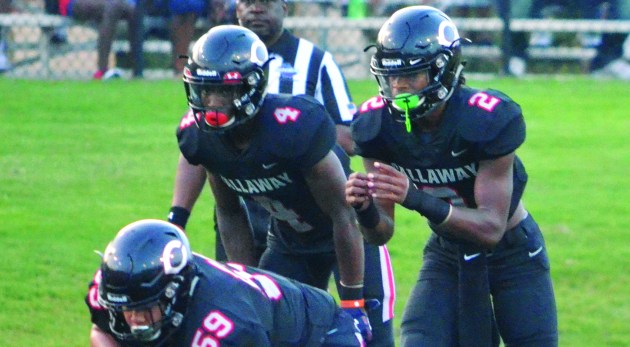 It was a punishing, over-powering performance.

In the first half of last week’s game, the Callaway Cavaliers and Opelika Bulldogs played on even terms, and it was tied 7-7 when the two teams headed to their respective locker rooms.

In the second half, it was all Callaway.

Callaway will look for a repeat performance today when it faces off against the rival LaGrange Grangers at Callaway Stadium.

“It’ll be a tough, physical ballgame,” Callaway head coach Pete Wiggins said. “The kids know one another. They’re close. They’ve played each other in rec ball, and middle school, and (junior varsity). It’ll be a hard-fought, physical game.”

LaGrange will try to slow down a Callaway offense that was unstoppable in the second half last week.

Bigsby had 22 carries for 249 yards with three touchdowns, all in the second half.

Freeman, making his first regular-season start at quarterback, had 10 carries for 125 yards with a touchdown, and he completed 4-of-7 passes for 71 yards.

Leading the way was an offensive line that wore down Opelika’s defense.

“I was really proud of our offensive line,” Wiggins said. “I thought as the game wore on, that they really leaned on and weighed on Opelika’s defensive front. And our backs ran hard.”

Callaway got it done defensively as well, making some critical stops in the second half that helped put the game away.

RJ Williams had 13 total tackles with a fumble recovery, Sidderian Shealey had 11 solo tackles, and Tely Fanning had 10 tackles.

Destin Patrick helped control things on the defensive line and he had a fumble recovery, and Markus Morman had an interception return for a touchdown in the fourth quarter.

It’s a defense that was hit hard by graduation last season, and that unit was up to the challenge against Opelika.

“We saw some kids succeed in some key positions that we needed them to,” Wiggins said. “Sidderian Shealey, Curmondre Bray, and RJ Williams all played well. And I’m really proud of our senior class for their leadership. I’m excited about the opportunities our football team has.”

After today, Callaway will play Cross Keys and Troup before beginning its Region 5-AA schedule on Sept. 21 at Temple.

As always, Wiggins said the team’s sole focus will be on the task at hand.

“We come out to practice each day to get better,” Wiggins said. “We focus on the opponent we have for that Friday night. LaGrange has great tradition. There’ll be a huge crowd.