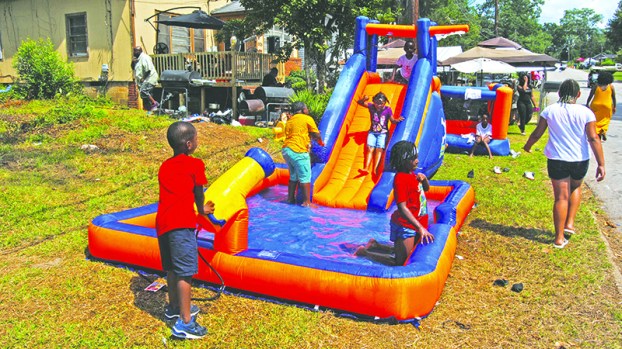 An inflatable pool was a popular place for kids seeking a break from the warm afternoon. An estimated 500 people turned out for Sunday’s West Point Day. --Contributed

From Staff Reports
The Valley Times-News

WEST POINT — An estimated 500 people were in attendance for a Labor Day weekend fun festival on East 9th Street in West Point. Most of the people at the end-of-summer party were from the local area, but some locals returned from New York, California and Ohio to mingle with long-time friends.

This was the second annual West Point Day, and it will likely continue as a yearly event to celebrate the connections people have with the town.

Organizing the event was West Point Vision, a nonprofit with a goal of giving back to the community through non-violent events that can be enjoyed by anyone.

“Everything here is free, and everyone is having a good time,” said Richard Chapman.

The big party took place in a sprawling area of East 9th Street between Avenues G and L. The street was blocked off at each end with West Point Police Department vehicles. Lots of tents were set up along East 9th Street.

“We like to do this on Sunday afternoon,” Chapman said. “People can have fun today and rest tomorrow before going back to work on Tuesday.”

The event was created with families in mind, so safety measures were taken to keep vehicles out of the way.

“We have a lot of children in the area,” Chapman explained. “We don’t need any vehicles trying to get through. The only thing that’s allowed are the golf carts that take people from one end to the other.”

Four of six LaGrange firefighters hurt in a fire on Revis Street Monday are still recovering from their injuries at... read more