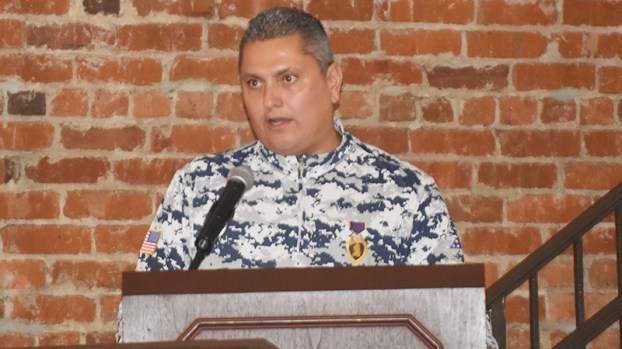 “It’s a worthy challenge, no doubt about it. The goal this year is one that will require commitment and focus and will conclude Dec. 31,” Asbell said. “While we have time to be successful … the clock is ticking.”

The luncheon included a rousing speech from U.S. Army veteran Major Ed Pulido, who was injured when a roadside bomb exploded in 2004.  His left leg was amputated in October of that year, and he’s since been awarded the Bronze Star with Valor, Purple Heart and other achievement medals.

“Behind the scenes, action [was taking place] behind the scenes by your United Way organizations,” Pulido said. “It was the American Red Cross who called my family to tell them I was going to be OK. It was the Red Cross who provided counseling, along with another counseling organization. The United Way would provide my wife with expense money … to go be with her husband. All of these people that were part of the United Way structure — support members, people like you in this room — made sure they weren’t going to leave one of their own behind.”

Pulido said he never thought he would need the United Way organizations, but did when he was in the hospital for almost a year.

“I made it a purpose in my life to let people know how important the United Way is,” Pulido said. “The important thing we can take from this organization is we take care of each other. We are one. You are the ones, the ones that go out and raise the money, the ones that make an impact, the ones that check these agencies to make sure they are honoring that pledge and that they are utilizing their dollars as effectively as possible. That’s a winning combination.”

The campaign’s slogan this year is “Be the One.” For more information on the campaign, or how do your part, visit www.unitedwaywga.org or visit the United Way of West Georgia Facebook page.