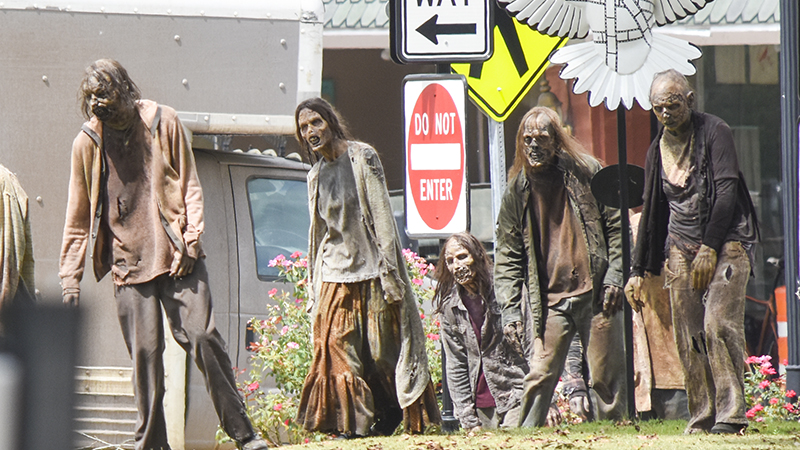 Zombies walk through downtown Hogansville Thursday as part of filming for “The Walking Dead.”

HOGANSVILLE — Anyone that wasn’t aware of what was going on Thursday may have thought a real zombie apocalypse had broken out in the city streets of Hogansville.

However, the only emergency Thursday was for the fans of “The Walking Dead,” who had to figure out how to get off work early or rework their schedule to get close Thursday’s filming in downtown Hogansville. Visitors came from all over Georgia and surrounding states just to catch a glimpse of the actors and actresses from the hit AMC television series, which is entering its ninth season and was filmed Thursday in Hogansville for the first time.

“We’ve got people from all over the southeast. I heard people coming from Ohio, Indiana, from Florida,” said Joey Karvelas, co-owner of Karvelas Pizza. “It’s definitely been a lot busier lunch, but there’s always a big crowd here. I’m pretty sure all these people came to see “The Walking Dead.”

One day of filming was held Thursday in Hogansville and many locals spent a majority of their day watching. Some got there as early as 5 a.m., which is when filming was scheduled to get underway.

Of course, part of being a fan is looking for some of the lead characters in the show.

Jose Sanchez said he served as a Walking Dead extra during season eight and dressed as a walker Thursday to take pictures with people in the crowd. He wasn’t participating Thursday. Instead, he was promoting a tour company in Hogansville and taking frightening photos with fans.

“I just like seeing the people smile,” Sanchez said.

Despite all of the increased activity downtown, Hogansville Police Chief Brian Harr said there were no major issues on Thursday.

“The residents are great, the people that are coming out to watch them have been, too,” Harr said. “If we’ve asked them to move, they’ve done exactly what we’ve asked. There have been no issues.”

Harr said Wednesday was a prep day, so the police department was prepared for road closures and how to redirect motorists around the filming. He said it was a great experience overall, and a new one, for the Hogansville Police Department.

“I want to ensure that my folks get the opportunity to work on something like this because it is fun,” Harr said.

Despite being the main location used for filming, Mayor Bill Stankiewicz said that City Hall remained open for business on Thursday. Any customers that needed to pay bills had to let a police officer know, and that officer escorted the customer around filming and into the building.

“It is a minor inconvenience, but only minor when you consider what the city is going to gain from the exposure,” Stankiewicz said.

The new season of the show starts on Oct. 7. It’s unclear when the Hogansville episode will air, but it is an odd-numbered episode.