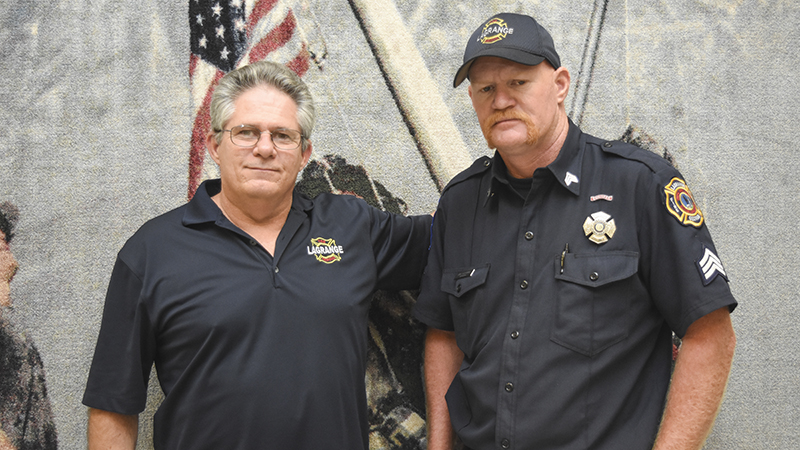 Lt. James Ormsby III has been a firefighter for nearly three decades, but he’d never encountered a situation like the one the LaGrange Fire Department faced Monday on Revis Street.

“I have never experienced what I experienced the other morning. I have seen things that I really don’t want to see again,” Ormsby said Thursday morning during a press conference at the LaGrange Fire Department headquarters on Hill Street.

Four LaGrange firefighters — Pete Trujillo, Jordan Avera, Jonathan Williamson and Josh Williams —were hospitalized due to burns from the fire. All four were treated at Grady Hospital in Atlanta, and one of the firefighters was transported to a burn unit in Augusta Wednesday.

Ormsby and Sean Guerrero also received minor injuries and were treated and released.

“We did exactly what we were supposed to,” said Sgt. Chris Greathouse, who also spoke Thursday. “Every fire is different, and there is no way to know what’s going to go wrong. That’s why we do the training. If something does go wrong, we know what to do and how to get out, and that’s exactly what those boys did. Everybody had a job to do and they knew what it was. That’s why they got out and that’s why we got the fire put out.”

Both firefighters described Monday’s fire as one that deteriorated quickly. A final report is not complete and the LFD has not released the cause of the fire. A resident of the home said Monday that he believed the fire started with a candle.

Lt. John Brant said the fire “flashed” on the firefighters inside.

“When the Mayday call came out, we went in to get them,” said Greathouse, whose role at the fire was to be part of the rapid intervention team if something went wrong. “That was probably the worst feeling I’ve ever felt, to know I have to go in there and get my guys.”

Both men said that Monday’s rescue was a team effort, and they credited firefighter after firefighter for their actions.  Ormsby said a freezer had to be moved in order to open up one escape route.

“I looked up on the porch and freezer was blocking the exit for the boys. I tried to push on the freezer and it wouldn’t move. I said something like we’ve got to get this thing out of here,” Ormsby said. “When I pushed on that freezer a second time, it just flew across the porch, and right then and there a firefighter’s hand came out the window.”

Ormsby had to be treated for smoke inhalation after the fire and thanked his comrades for treating him when he was unable to continue.

“During the process of pulling the firemen from the structure, I breathed in a lot of heavy smoke, but once you grab onto them you aren’t going to let them go,” Ormsby said. “The smoke kind of got to me a little bit. I think my adrenaline kept me going until all the firefighters who were injured left the scene, and I could tell something was wrong when I started back toward the house. We still had a job to do, but then I started having some difficulties, and the firemen had to treat me. I don’t remember exactly what happened, but I remember they were strong enough to lift me up and put me in the back of that fire truck and treat me. I remember that, and I am so thankful for them.”

Ormsby said all of the firefighters are extremely close and asked the community to continue praying.

A GoFundMe page continues to collect money for the injured firefighters and their families. More than $15,000 of a $25,000 goal had been raised by 193 people as of Thursday night. For more information, visit Gofundme.com/injured-lagrange-firefighters

Mayor: The Walking Dead filming was audition for city…