Mayor: The Walking Dead filming was audition for city of Hogansville 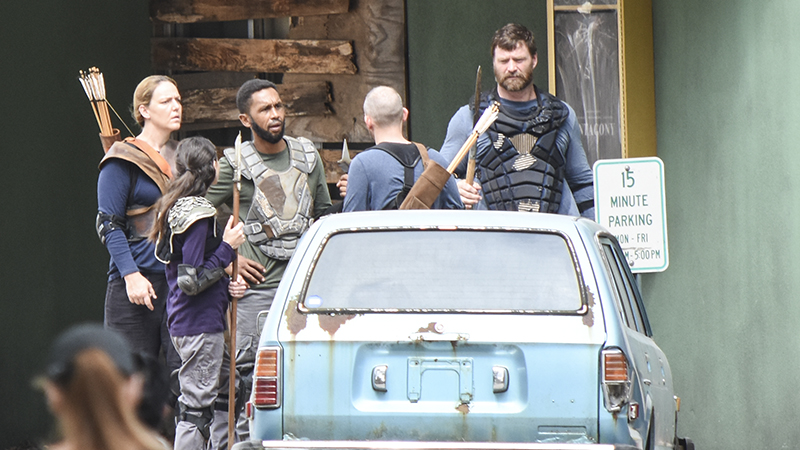 Actors wait for a scene to start in front of Hogansville’s Royal Theatre. --Daniel Evans

The city of Hogansville might have doubled in size Thursday as AMC television series, The Walking Dead, was filmed downtown.

Hogansville Mayor Bill Stankiewicz was impressed with the crowds, but he also had the city’s long-term future in mind as he watched the filming take place Thursday from the inside of City Hall. City officials are hopeful that a positive experience for Stalwart Films means other filming opportunities might follow from other film production companies.

“It’s an audition,” Stankiewicz said. “They are going to make judgements based on their experience.”

Although it’s unclear what role the city will play in season 9 of the popular television show, city leaders have already considered ways to interest fans of “The Walking Dead.” A portion of The Royal Theatre was painted dark green this week for the filming, and the city council decided Tuesday evening to leave it that way.

“We’ve been advised to keep it as much like the filming as we possibly can, and the more you can do to make it seem like it’s still The Walking Dead, the better off you are going to be from a tourism perspective,” Stankiewicz said.

Crew members from Stalwart Films only had positive things to say about their experience in the city.

“It’s a great little town. It’s got a great look to it,” said Mike Riley, supervising location manager for Stalwart Films. “I would think that once word is out that it’s down here, they might get some business, not necessarily just from us, but other shows. I think it will be a positive thing for them, and I think they recognized that. The [city leaders] recognized it when we came in that this was an opportunity to get some visibility, and I think that’s been part of the reason they have been very open to us.”

Although Stankiewicz said he had no details, it sounds like the city might already have another deal in the works. He said he’s been purposely left in the dark about what’s going on.

“I think it’s a tourism driver, and it may bring some residents, but basically it’s a tourism driver. And yes, there is something else in the works, and I’m not at liberty to talk about it,” Stankiewicz said. “We operate on a need-to-know basis, and they haven’t told me.”

The filming lasted for one day, starting early Thursday morning. It was scheduled to end Thursday evening around 8 p.m.