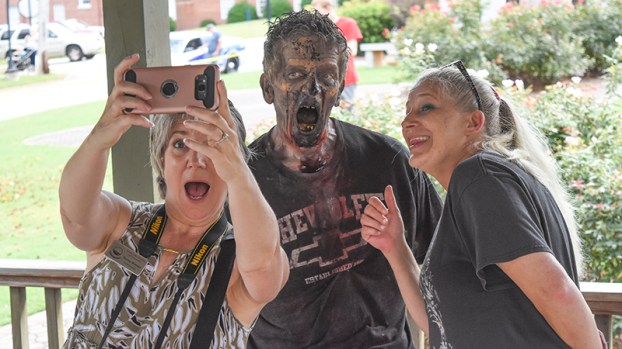 Fans of The Walking Dead pose for a picture with a man dressed up as a zombie Thursday in Hogansville. --Daniel Evans

Why was Hogansville picked for The Walking Dead?

For the City of Hogansville, all of those selfies helped catch the attention of location scouts for Stalwart Films, leading to an unexpected opportunity. On Thursday, nearly one full month after City Hall Selfie Day, the city hosted Stalwart’s filming of The Walking Dead.

Stankiewicz said it was the selfies, taken all over town by City Manager David Milliron, that led to one of the most unique days in Hogansville history.

“David Milliron posted that whole series of selfies and a description of each of the properties on Facebook and someone from this location company saw it, came to see us and asked if we would be interested,” Stankiewicz said.

Stalwart Films location scouts didn’t specifically mention Hogansville’s selfie photos, but they had been looking for a historic theatre.

“We were looking for a theater, exterior and interior as well,” said Mike Riley, supervising location manager for Stalwart Films. “We had looked in several places around our zone in the Senoia area and our production designer had been to Hogansville, on a weekend or something driving around, and remembered the theater over here.”

Hogansville’s Royal Theater, built in 1937, ended up being exactly what Stalwart was looking for.

“I think it’s a pretty unique piece. It’s a nice piece of art deco architecture,” Riley said. There’s something very similar in Manchester, but that’s much further for us to go. Most of the small towns back in their heydays had opera houses or theaters for entertainment purposes, but they are kind of hard to find, especially in the metro area. They get used for other purposes or demolished. This is a really nice piece of architecture.”

Sarah Williams, location manager for Stalwart Films, said most of the filming involved the theater Thursday, but other parts of the city were used as well.

“For this particular one, it was mostly the theater and that takes up a big part of our day,” she said. “We have a little bit of road work we are going to pair with it, but overall we try to get as much done in one place as we can.”

“The town itself has a good look to it for us. It’s fortunate for us, unfortunate for the city, I’m afraid, that there’s not a lot of businesses that are open here,” Riley said. “That helps us because we have to control our workspace.”

Riley said he hopes the filming ends up bringing more people to Hogansville.

“I think it’s a little gem down here that people may hopefully discover,” he said.

One of the four hospitalized LaGrange firefighters has been transferred to a burn center in Augusta for further treatment, according... read more