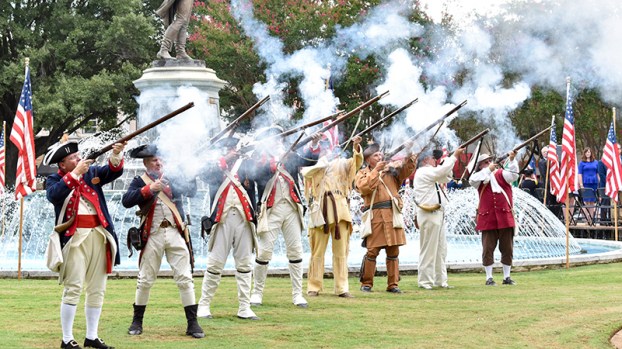 As the LaGrange Community Band played “The Star-Spangled Banner,” students from Lafayette Christian School wiggled forward for a better look on Thursday at a celebration to commemorate the birthday of Marquis de Lafayette, who inspired LaGrange’s name.

This year marks the first year that Lafayette’s birthday has been celebrated as a state holiday, and politicians from near and far gathered alongside downtown merchants to memorialize the man who made major contributions to the American Revolution, and whose statue now adorns LaGrange’s square.

“Long before our historic alliance and the two world wars, the Marquis de Lafayette was the living embodiment of Franco-American friendship and partnership,” said Dr. Kathryn Miner, assistant to the cultural attaché at the French Consulate in Atlanta. “His dedicated efforts to connect France and the fledgling United States during this critical moment in our shared history allowed for the formation of a solid diplomatic union.”

Lafayette fought for the ideal of freedom and is known for that fight both in the United States and in France. Georgia is one of four states to celebrate Lafayette and the only state to celebrate his contributions on his birthday. Gov. Nathan Deal officially signed the holiday into existence earlier this year.

“This year for the first time ever the [Georgia] senate, the [Georgia] house and the governor of the state of Georgia signed off on a proclamation designating Sept. 6 as Lafayette Day in Georgia every year,” said Dr. Richard Ingram, the president of the Lafayette Alliance.

Lafayette’s story is tied to LaGrange for more reasons than just his contributions in the Revolutionary War, his commitment to freedom and a statue. The City of LaGrange was named in his honor following a visit to the area in 1825.

“In history, sometimes things are intentional, and sometimes they are coincidental,” LaGrange Mayor Jim Thornton said. “In some ways, it was coincidental that in 1825, when Gen. Lafayette was doing his tour of the United States and being accompanied across Georgia with Gov. [George] Troup, a remark was made that is in some ways lost to history, but in some ways so important here in our community, about the similarity between the West Georgia area and Gen. Lafayette’s wife’s family’s chateau in France.”

At that time, the area had recently been acquired for settlement, and in 1828, the county seat of the recently-formed Troup County was named LaGrange to honor Lafayette.

“It was an intentional statement by the leadership of this community in 1828 that we wanted to honor this man in some way,” Thornton said. “As an older gentleman at that point, he had become in his lifetime a symbol of liberty.”

Other speakers said Lafayette’s ideals inspired the spirit of the city.

“We take pride in the community that we have built together, and when we know the history behind the progress of our city, it becomes personal,” said Kathryn Mathews, a member of the Lafayette Alliance.

“We take ownership and like to honor the people who have made this community what it is today. We do this making it better. Why does Lafayette matter? To me because he loved America.”

Many people viewing art have certain expectations that they bring with that experience, but local artist Lanora Yates enjoys challenging... read more