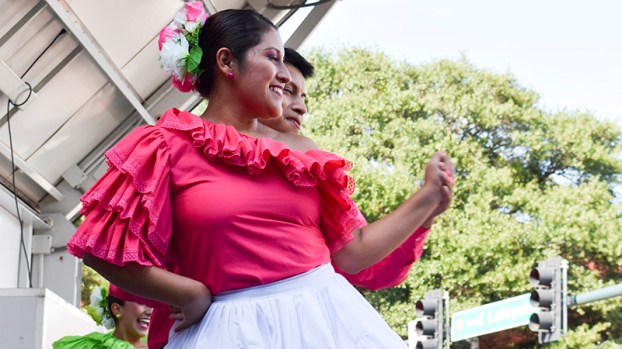 Young girls in Indian saris bumped against a Chinese lion as a kilt clad performer prepared to go on stage with her bag pipes on Main Street on Saturday.

The LaGrange International Friendship Exchange’s third annual festival was a hit with thousands crowding the streets to sample food and learn about different cultures. Only two hours into the festival, LIFE had already given out all 2,000 of its “goody bags” to attendees with residents and visitors alike still pouring into the street. Organizers were excited about the turnout at the festival and the connected concert and art show.

“This is our third year of our festival weekend,” said Ethyl Ault, the president of LIFE. “I call it the festival weekend because Friday night was the art contest, and we had beautiful artwork. Then [Saturday] we had the festival. We have 22 cultures.”

While many of the booths were manned by locals, event organizers said that they received calls from groups in Columbus and Atlanta hoping to take part in the festival — as attendees or performers.

“I got inquiries from people in Atlanta who heard that LaGrange, this small town, is promoting an international festival,” said Nancy Olney, an organizer. “They are so amazed that we are able to do this. It is a big thing. People don’t realize how big it is, but we’ve got people from Columbus representing their country [that they are originally from]. There are people from all over.”

Representatives from Germany, France, South Korea, Mexico, Peru, Nigeria and other countries shared parts of their culture at the festival. Most of the people running the booths live in Troup County and work at local businesses, but several said that they had asked family members to visit from other countries specifically on the festival weekend in order to help prepare traditional foods.

Several short-term residents, including a number of exchange students, also enjoyed the festival between turns sitting at the booths.

“The Troup County community embraces this, and I am very proud of our community, that they are so open and accepting,” Olney said. “Students have been involved from high schools. We’ve had people from the college on this. Some of the fraternities are getting involved in it.”

For more information on the LaGrange International Friendship Exchange, visit the group on Facebook. LIFE thanked the Callaway High School ROTC for its assistance.

B-52’s to perform at Sweetland

Sweetland Amphitheatre announced Friday that the B-52’s will perform at the venue on Nov. 9.  The B-52’s are best known... read more