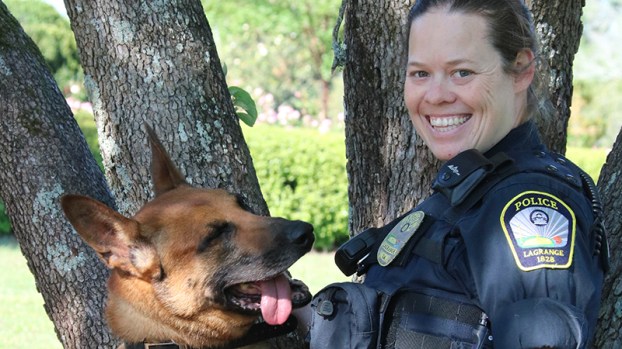 ‘He was my best friend:’ Longtime LPD K9 officer Chico passes away

Chico served as a K9 officer for the LPD from September 2010 until April 2018. Chico had been living with K9 handler Wendy Bryant and her husband Clayton Bryant since his retirement.

“He was literally my best friend, my partner, somebody you could talk to at any time just to get steam off,” Bryant said. “He was a family member. Of course, after his retirement, he stayed inside and he was enjoying the retirement life. My kids treated him like the family pet.”

Through his years of service, Chico helped the LaGrange community in many ways, including leading many searches for suspects. He went missing in 2014, after tracking an escaped inmate into the woods. After days of searching, Chico was found after the suspect told police where he’d seen him in the woods.

“Things really changed when he went missing about four years ago. That shows how emotional you can get when it comes to your partner,” Bryant said.

The search for Chico became a community-wide and even statewide story. In the years following the story, Bryant said all of the K9 dogs were called Chico.

“Everybody in the community knew who he was,” Bryant said. “Even though we have the names of the dogs on our vehicle, they would go up to the other handlers and say ‘is that that Chico dog?’ [Everybody thought] every dog was named Chico for the last several years.”

One of those demonstrations was usually the LPD’s Paw Day, an event started by Wendy Bryant to showcase the department’s K9 officers and bring the community together.

In April, Chico’s retirement was recognized by K9’s of West Georgia during a presentation at the police department.

“We’re pretty proud of the fact that they respond to 4,000 or 5,000 calls a year,” said Police Chief Lou Dekmar at the presentation. “They’re involved in 500 to 600 hundred apprehensions a year in addition. They do tracking and drug work, and also provide the opportunity for safe inspection of homes and buildings so that the officers aren’t unnecessarily jeopardized.”

The LPD’s K9 unit has seen a number of changes this year. Clayton lost his K9 dog, Rik, to cancer earlier this year as well. Rik had also recently retired.

Bryant has been working with Chaz, a 19-month old German Shephard, over the last two months. She said they will form a tight bond, but it’s going to take time.

“It’s hard to be a handler that came from a dog that you worked for so long that you put so much trust and so much effort into… to go to a dog that you just got,” Bryant said. “There’s not that trust yet. The loyalty and all has to come, and it gets earned over time when you see the dog work and progress and become better.”

The Visual Artists Alliance of LaGrange opened their annual show at the LaGrange Art Museum on Saturday. The show featured... read more