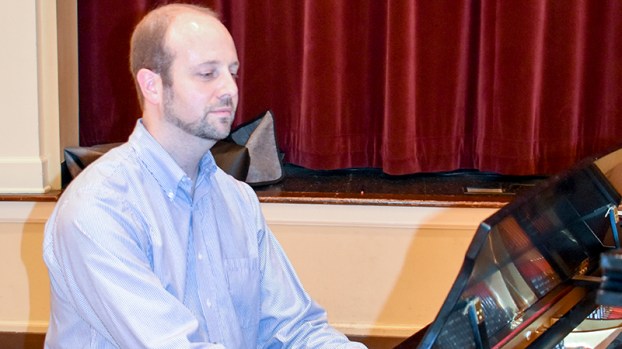 The Sons of Lafayette Male Choir held its first rehearsal of the season on Monday, under the leadership of its new interim director, Darian Krimm.

Krimm is the minister of music and worship at First United Methodist Church of LaGrange, and the growing choir will use the church as its primary practice location this year as it prepares for its annual Christmas concert. Concerts are still expected to be held at First Presbyterian Church.

“We are excited, just thrilled that Darian has agreed to come aboard and assist us for the season,” said Don McWhorter, the president of the board for the Sons of Lafayette. “We are looking forward to getting ready for Christmas.”

Krimm said that he looks forward to working with the male choir in preparation for the concert.

“The men have a wonderful sound,” Krimm said. “It is a really rich sound. There is nothing like men’s voices, and I only say that because the way men’s voices are structured, the overtones they produce and everything when they sing in harmony. It is just a rich, full sound that you don’t necessarily get with other voicings. … It is a really special and unique sound, and I’m excited to work with it.”

According to Krimm, the Christmas concert will feature a variety of carols and sacred songs.

The Sons of Lafayette was founded in 2001, and it has grown over the years. The group had 32 members during last season, and McWhorter said he hopes to see more local men join, with a goal of 45 or more members.

The Sons of Lafayette’s annual Christmas concert will be at First Presbyterian Church on Dec. 8 at 7 p.m. and Dec. 9 at 3 p.m.

The Sons of Lafayette plan to hold 14 rehearsals to prepare for the concert season, but any men who would like to join the group may still contact Krimm for placement in the choir at darian@lagrangefumc.org as soon as possible.

‘He was my best friend:’ Longtime LPD K9 officer Chico passes away