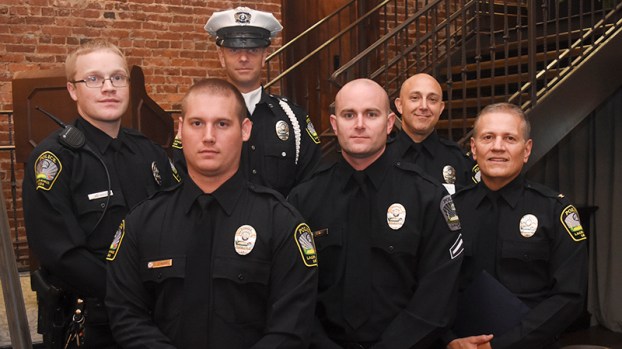 Members of the LaGrange Police Department pose for a picture after being honored for various Valor Awards at Tuesday’s Early Bird Breakfast at Del’avant Event Center. --Daniel Evans

The LaGrange-Troup County Chamber of Commerce hosted a very special Early Bird Breakfast Tuesday, thanking the men and women of law enforcement through the annual Valor Awards. The breakfast was also held as a remembrance of the events of Sept. 11, 2001.

The Valor Awards were given out for incidents that occurred between July 1, 2017 and June 30, 2018, and honored local law enforcement officials for their actions.

LaGrange Police Chief Lou Dekmar, who first came up with the idea for the Valor Awards, was the guest speaker. He spoke about his role as the president of the International Association of Chiefs of Police, as well as policing as a whole.

“Our public safety officials represented here today, police and fire, EMS and 911, need not seek opportunities to improve their legacy,” Dekmar said. “By their service, they’ve created one that makes a difference in countless lives. I’m proud to be a part of that and to work with those who will be honored this morning.”

The following were the award winners:

Acts in situation where

life was in jeopardy

Three awards were given out for situations where an individual’s life was in jeopardy and aid was administered.

Gunter, Brazell and Horne were honored for an incident where the LaGrange Fire Department responded to an emergency call and found a man lying on his back with labored breathing and a faint pulse. The fire crew assisted with respirations with a bag-mask valve attached to oxygen and an artificial airway was established. Additional medications were also used to stabilize the patient. Fogg, Welsh and Williamson were recognized for administering CPR and bag-valve-mask ventilation to a man who was found lying on his bathroom floor. The man had no pulse for four minutes, but epinephrine and atropine were administered, raising his heart rate to where he could be transported to the hospital. The man is now living at home with his family. The final award went to Horseman, Riemerts and Montondo of the LaGrange Police Department for their response to a shooting. Riemerts and Montondo cleared the residence and secured the shooter, while Horseman helped the victim with the gunshot wound. The victim was transported via Air Evac and is continuing to recover.

The Medal of Merit is awarded to public safety officials who have presented outstanding outreach programs in the community.

The LPD began sending officers to Crisis Intervention Team training in 2006 and all officers were trained by 2012. CIT focuses on identifying a person suffering from mental illness and teaching de-escalation techniques. The LPD has also partnered with Troup Transformation to create the Troup County Adult Mental Health Court.

Communications Person of the Year 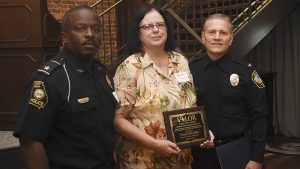 The award goes to the public safety communications official who has performed his or her job with exceptional skill, expertise, innovation and results.

McClellan received a call that a resident returned home to find an unknown male sitting on her porch with a firearm. She dispatched police units, medical units and contacted the investigator on call. She also quickly got in touch with the Georgia Bureau of Investigations, the coroner’s office and additional officers.

Public Safety Unit of the Year

This award is presented to the public safety professionals who have performed their jobs with exceptional skill, expertise, innovation and results.

The three departments were recognized for their collaborative efforts on Sept. 5. The fire department responded to two structure fires within a short period of time, one intentionally set. During the second fire, the Troup County Fire Department and the LaGrange Police Department were also called to the scene and assisted in saving 10 cats.

This award is presented to the public safety professional who has performed his or her duty with exceptional skill, expertise, innovation and results.

Jones has served with the LPD since 1999 and has served with criminal investigations since 2003. During the past year, he has investigated two homicides and three cold cases. He also was able to bring a two-year cold case homicide to a conclusion by issuing warrants for the arrest of the suspect, who was later found in Mobile, Alabama. Jones was also recognized for doing his job through “debilitating” health issues, using his vacation time to visit doctors or specialists.

The Medal of Valor is awarded for situations where a public safety official or unit demonstrates extraordinary judgement in performance of his or her duties. 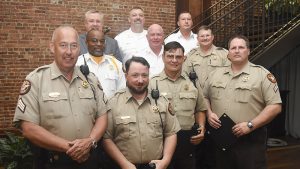 Two awards were handed out, one to the LPD and TCSO, and one to four representatives of Troup County E-911, but both were related to the same incident on June 6. The LPD and TCSO responded to a residence where a man said he had shot his wife, and they found a man armed with a firearm. The man refused to lower his weapon and opened fire on officers and was shot. He later died of his injuries. The E-911 staff was recognized for their work in the same incident, dispatching personnel and trying to keep the caller calm until help arrived.

The Sons of Lafayette Male Choir held its first rehearsal of the season on Monday, under the leadership of its... read more