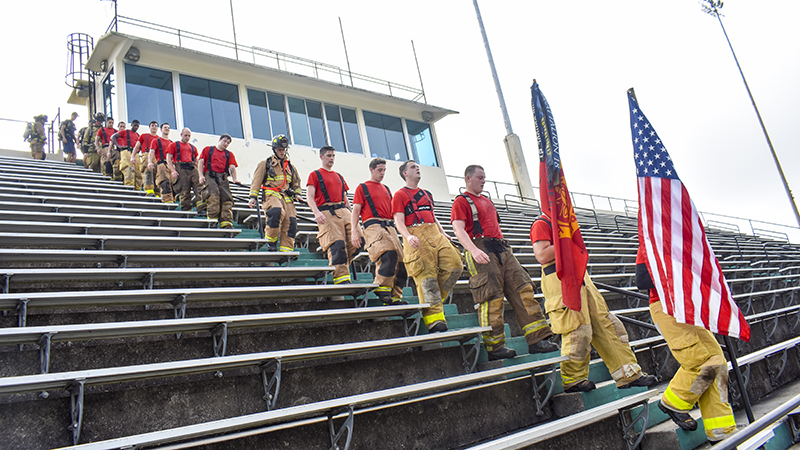 The LaGrange Fire Department marched up and down the steps at Callaway Stadium in honor of the men and women who lost their lives on Sept. 11, 2001. --Contributed

The LaGrange Fire Department had a chance to hear from two of their own injured firefighters Tuesday morning, while around 40 current and future firefighters walked the steps of Callaway Stadium in honor of those who lost their lives on Sept. 11, 2001.

The fire department met at the stadium Tuesday to climb 110 flights of stairs in honor of those lost in the terror acts that occurred 17 years ago.

“We wanted to pay tribute to the 343 firefighters who died in 2001,” said LFD Deputy Chief John Brant. “A lot of the guys were young and they were very small when this happened, so they were not impacted as much as us, who were older when this happened.”

“Everybody was tired who did it,” Brant said. “That was part of the significance on why we did the down part of it too. We wanted to let them know that those guys weren’t fortunate enough to walk down those steps. We wanted to let them know they are fortunate enough to walk down the 110 flights of steps, and [that day] they were not.”

The LFD also got some good news involving two of their firefighters, as Pete Trujillo and Jordan Avera were released from Grady Hospital on Monday. Trujillo and Avera had second and third-degree burns following a structure fire on Revis Street on Labor Day.

Brant said he saw Trujillo last night and he was resting well.

“[Avera] actually came to the tribute this morning to see the guys and show his support,” Brant said.

Brant said he also Facetimed Tuesday morning with Jonathan Williams, one of the two remaining hospitalized firefighters. Josh Williams remains hospitalized at the Augusta Burn Center with burns to 30 percent of his body. Brant said Williams had another surgery scheduled on Tuesday.

“I would say the [donations] mean the world to them, to have that assurance the bills are paid,” Brant said. “The city is taking care of the medical responsibility of everything, but a lot of these guys work part time jobs and depend on that part-time money to support their families, so it means a lot to them.”