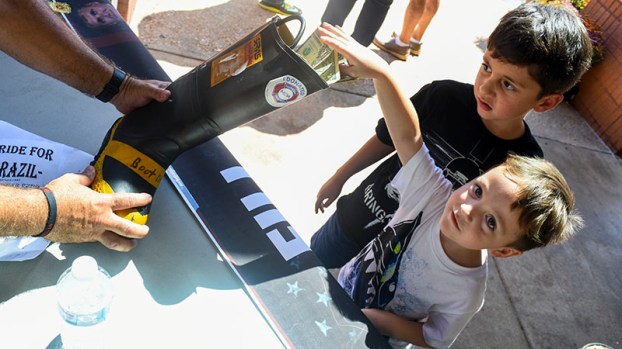 Peter Spivey, 4, puts money in a boot during the Fill the Boot Drive Saturday at Kroger. Joshua Spivey, his brother, is shown in the background. Money raised is going toward the four injured LaGrange firefighters. (DANIEL EVANS | Daily News)

Local fire departments usually gather outside local stores to raise money for various causes, but on Friday they were outside taking up donations for four of their own.

The LaGrange Fire Department and Troup County Fire Department had men and women stationed outside the Walmart on New Franklin Road and Kroger Friday taking up money for four injured firefighters hurt in a Labor Day blaze on Revis Street. The Fill the Boot drive started Thursday and will continue Saturday, when they’ll again be collecting donations from noon until 6 p.m.

“Even though it’s covered as an on-duty injury, there are always expenses. They were up in Atlanta for a couple of weeks and one is in Augusta,” said Alex Aleman, a LFD firefighter and paramedic. “It takes an extra toll on the family, all the extra expenses, looking for babysitters, hotel expenses, because they are trying to stay with their loved ones as long as possible. All those expenses add up so this is just something we can do to help them through these trying times.”

Pete Trujillo, Jordan Avera, Jonathan Williamson and Josh Williams were injured in the fire. Trujillo and Avera were released earlier this week. According to a City of LaGrange press release, Williamson was transferred from Grady Hospital in Atlanta to the Joseph M. Still Burn Center in Austell.

Williams remains at the Augusta Burn Center and is expected to be in the hospital for at least 30 days.

“I got to visit with the guys on Monday, and they were in good spirits. It’s an uphill battle for all of them, but they appreciate all of the support we are giving them,” Aleman said.

Aleman was one of two firemen in front of Kroger, but just down the road, two men with the Troup County Fire Department were also raising money.

“It hits home, especially this close to home, and it does make you want to support them more knowing it’s close to home,” said Jordan Bartlett with the TCFD.

Aleman said the TCFD is one of the fire departments that has helped pick up the slack left for the LFD.

“You don’t really see that [support] in any other profession,” Aleman said.

The boots at both locations were full of donations, a reminder that the community is backing the fire department through this trying time. Aleman said it’s a reminder that firefighters are a brotherhood.

“You really get the full impact of how much the community gets behind you to support you,” Aleman said. “I was saying earlier that you have to choke back the tears a little bit because you started getting a flood of emotions.”